The adaptation of human beings to computers can be understood as a result from the ‘master and slave’ model, which defined the design of computers and systems since the early days.

They have been designed to slowly take over the position of the masters, and eliminating the slaves, by developing higher and higher levels of thought needed to interact with them. This can be changed, but how is very difficult. It would require a complete change in the mindset of how we use computers. Quillinan thinks out loud when he suggests that asking them for advise maybe, and then making your decision as a human being, would already create different systems. This would seriously challenge the current model in which on the basis of input of data and having something operating on that data, the result is taken as ‘gospel’, as Quillinan formulates it.

Current computers and systems do not have the ability to negotiate with a human being about what is a good idea or not. To program such negotiation with a human is very difficult because all people mean different things when they say something. You have to be able to negotiate what you mean, the terms of reference with the computer. And then it has to have some sort of training so it understands what you mean by things, and Quillinan illustrates, “You can’t say well, I want this to be sparkly instead of a single colour”. Today computers are good at competitive tasks without boredom, which humans are really bad at. And they will do the same thing hundreds of millions times if you ask them to without complaining. Humans are good at higher level thought; solving a problem in an a-symmetric manner. Computers can only do what you tell them to do. Quillinan agrees that they have become masters to a certain degree, but the flipside is that they are also our slaves. They do the really ugly tasks that we don’t want to do.

The way things have changed over time is dramatic. In the way things are computed we follow a model of things just happening in the order we specify and that’s how most computers run. But there are alternatives, things like, instead of making things happen in order, we have some sort of logic based thinking where you backtrack trough the information you have and then you figure out what happens next. That’s an alternative way of computing. And while such computers exist they’re not very popular. The physical production of computers, it’s all emulated on sequential and parallel manner and that’s in some ways more logical, because what you’re doing in such a logic based approach is that you’re forcing the computer to behave the way the human wants. Still people are very active in researching other models of designing systems, but overwhelmingly people have chosen to follow the imperative model and do things in that way.

The reason that we use the imperative model is a result of being mostly funded by the military but also has to do with how cheap it was to produce components. And those components went out and therefore, in fact it is - I wouldn’t say Bill Gates’ fault - but it’s the success of companies like Microsoft and IBM in producing cheap computers, this model is there. It is much more expensive to produce other sorts of computers now, Quillinan explains. 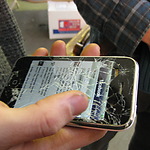 Caroline Nevejan - One of the biggest problems in most crisis has been lack of understanding, lack of knowledge of…