Conversation as a play with rules: Three short dialogues between Luna Maurer and Andreas Zangger on the interaction of humans and machines, on designing systems, and on participation of the users.

In these dialogue we try to bring in the questions and experiences arising in the context of our work. Luna Maurer is a designer and artist working in the field of digital media. Andreas Zangger is historian of science and of transnational networks.
The work of Luna Maurer serves as a bracket for the dialogue.
The dialogues are inspired by the idea of conditional design that is at the centre of Luna Maurer's work. They are based on chats on Skype. There were rules for the chat, e.g. we had to wait for an answer. The speed of the chat was thus utterly reduced. Afterwards they were edited and grouped by topics. Each of the dialogues has a general topic: the first deals with the relationship of humans and machines, the second on designing system and the idea of constraints and freedom in the process, and the third about users and the intelligence of the crowd. Some of the mentioned projects of Luna Maurer are presented separately.

Luna Maurer, Andreas Zangger - The second dialogue deals with the designing of systems or plays, as well as the constraints and… 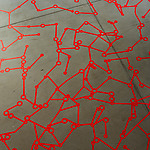 Luna Maurer, Andreas Zangger - The third dialogue deals with the collective processes, mechanical turk and the intelligence of the…