The source material for this case study consists of several kinds of publications. There are the proceedings, published by Paradiso and Hack-Tic, there is the press coverage in national and international newspapers, there are the audio tapes of the show in the large auditorium and there are the 5 personal folders in which all correspondence and production material was archived by myself at the time. They are labelled Personal (in which all personal notes between the organizers are kept), Bizzinizz (in which all contracts and agreements with technology companies, guests and budgets are kept), Organization (in which most communication with participants is kept), Chaos Info Show (a folder which consists mostly of press material which includes the GHP as well as the Chaos Info Show, a programme that I organized in the fall of 1988 in Paradiso with the Chaos Computer Club) and Press, which includes all press clippings from the GHP. There is also the written report by Rop Gonggrijp, which was published in Hack-Tic 5/6, and which was written more from the perspective of the hackers and is the only report that addresses the online communication that took place during the GHP. Therefore it is cited a great deal. In the description below I will sketch what happened during the GHP, but this should not be viewed as a historical account of what took place. For this other methodologies would have to have been utilised like identifying other archives, using other historical sources and interviewing more people.

The description below is determined by the research question at the heart of this study. I am interested in what happened as regards the design of presence and the variety of presences the performer and the audience encountered. In a networked event that I produced later I also evaluated the audience experience by conducting interviews and surveys.note 97 At the time we were just trying to make it work, nobody thought about evaluation. Any experience was immediately used for improvement, a classical trial and error methodology, which characterizes many innovations in their first phases. Therefore, I will sketch the context of the situation so that my perceptions and reflections of what happened to the audience can be better understood. To give an impression of the impact of the Galactic Hacker Party, and to show it had a public domain character, I will first give an impression below of the press coverage it received. Then I will address elements of infrastructure, discuss the programme and elaborate on some reflections of mine that were triggered when writing about the GHP in a text laboratory manner. The formulation of certain perceptions triggered more memories and perceptions that were then formulated, and which in turn became the trigger for yet more perceptions and so forth. 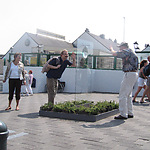