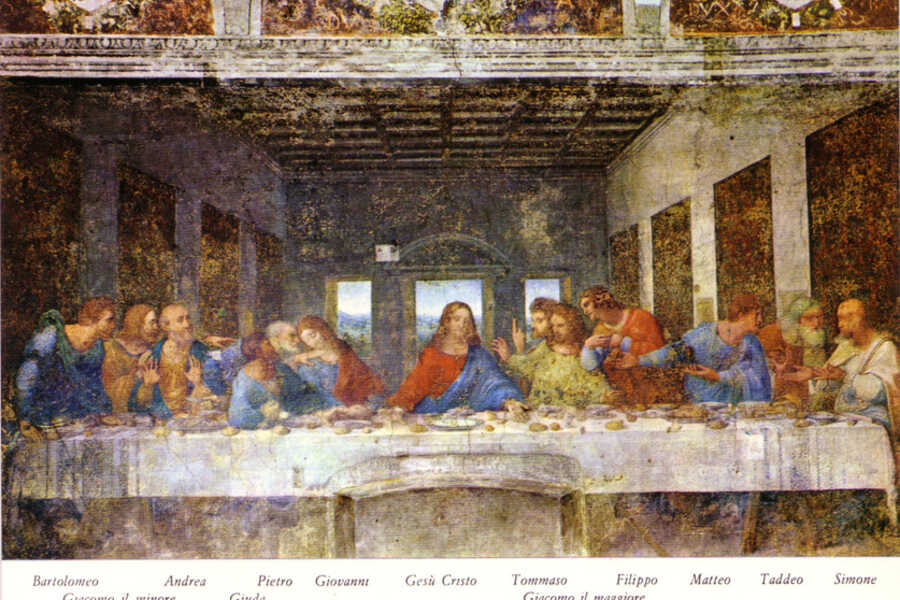 Turning, then, to the designers of such hybrid spatial montage, we may observe how different features are combined—such as the mediated gaze in virtual pictorial space—to draw the observer into its spatial extension.[3] Renaissance artists frequently used architectural orders: columns and pilasters as ‘signposts to mark the transition from actual to virtual space’ (Steinberg 2001: 155)—all in accordance with the Albertian concept of art as a ‘window onto the world’.[4]

Any art history book will describe Leonardo da Vinci’s Last Supper as an exemplar, but my study on the origins of presence design shows that in addition to being an architect, engineer and artist, da Vinci was effectively a presence designer (Gullström 2010). Through its numerous reproductions, contemporary observers are acquainted with the Last Supper as a painting, rather than a spatial extension (Fig. 1). However, by observing the Last Supper as part of the spatial context in which it was conceived, its function as part of a design scheme may be understood (Fig. 2). The fact that the painting is a part of the design of a refectory provides the most important clue; it suggests that it is not just any painting or vista, not just any window onto the world.[5]

I use this example to show, on a general level, that already then people were quite familiar with moving between different kinds of (virtual) space and, more specifically, that the refectory (including its artwork) is the result of a designer’s intent to combine virtual space(s) and real space(s) in intricate ways. The monks are, symbolically, sharing the room—even dining—with Jesus who, however, is not physically present. In today’s context, it may be referred to as a ‘virtual pictorial space’ and as a form of communication made possible by means of art and architectural media. The monks are inside a real space when they encounter this virtual space. They are, thus, in a ‘hybrid space’, ‘mixed-reality space’, ‘composite space’ or, as I refer to it, the monks are in a shared mediated space.

------------------------------
Note 3: Velazquez’ painting Las Meninas from 1656 (Museo del Prado, Madrid) is a good example, famously deconstructed by Michel Foucault in his opening of The Order of Things (Foucault 1966).
Note 4: This concept is first described in Leon Battista Alberti’s treatise on painting De Pictura which appeared in Latin ca. 1435–1436 (Alberti ca. 1435–1436, 1970).
Note 5: Why would da Vinci choose a malfunctioning construction of perspective? This question has engaged art historians in a long-standing debate stretching over centuries and is referred elsewhere (Gullström 2010: 67ff; Steinberg 1973, 1995, 2001; Ladwein 2006). In 1979, a Norwegian art critic showed that the mural was part of the spatial design of the refectory by providing an account of the full aesthetic context in which The Last Supper was commissioned and conceived, hereby criticizing his fellow art historians, who seemed to think that the mural’s form and content were mere coincidence “…as if da Vinci’s hands were free when it came to executing the motif” (Danbolt 1979: 70). Danbolt explained the techniques da Vinci used to assemble two different functions in response to the commission; he was a skilled artist, and it was obviously not due to a lack in skill that he opted not to follow the standard rules of perspective. We may safely conclude it was intentional. 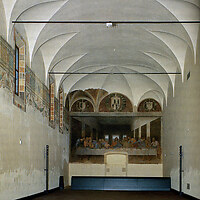 Charlie Gullström - Whether a frescoed wall, a cave mural, a digital projection or an Italian Renaissance perspective