The mediated spaces of presence design

As noted by researchers who have sought to define the prerequisites for (witnessed) mediated presence, the experience of mediated presence is individual and negotiated as part of a process to establish trust and confirmation from the remote party/parties (IJsselsteijn 2004; IJsellsteijn and Riva 2003; Nevejan 2007).

While my focus is on the spaces in which mediated interaction occurs—the mediated spaces of presence design—Caroline Nevejan has addressed presence design with a specific focus on the concept of trust (Nevejan 2007). Based on a distinction between natural presence and witnessed mediated presence, she relates the design of presence to the design of trust in social interaction. Arguing that there are social implications, which designers are little aware of, concerning the way trust and truth are negotiated between people, Nevejan stresses the need for swift feed-back mechanisms (to provide an expected ‘re-action’ to an action) generally in designing for social interaction (ibid: 252). Her study shows that mediated presence may increase the moral distance between actors who collaborate, due to the limited sensorial exchange, thus with a potential negative effect on trust. Nevejan proposes a conceptual framework for the new configurations of time, space, action and relation that are enabled through presence design and no longer are dictated by ‘physical presence’. She refers to this as the YUTPA framework where YUTPA is an acronym for ‘being with You in Unity of Time, Place and Action’ (Cf. Nevejan 2009). The word Unity here refers to a specific configuration between four dimensions that a certain product or process design imposes on the user, and which favours certain interactions while excluding others.[10]

My own design-led research has shown that mediated spaces can provide sufficient audiovisual information about the remote space(s) and other person(s), allowing the subtleties of nonverbal communication to inform the interaction. Based on my personal design experiences, I found that in designing for presence, certain spatial features have an effect on the user’s ability to experience a mediated spatial extension (sense of a shared mediated space), which, in turn, can facilitate the experience of mediated presence. My conclusion is that certain spatial tools play an important role in the process in which trust and truth is negotiated, hence with an impact on knowledge sharing.

Our designer observations comply with the general requirements for (witnessed) mediated presence, and it is my concern, here, to substantiate such observations, not by further claims that mediated spaces can work, but rather by showing how many of the concerns Nevejan and IJsselsteijn raise, precisely are spatial design considerations. 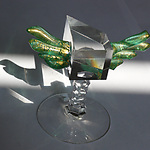 Timing is critical in online collaboration

Caroline Nevejan - Wilson has a distinct behavior of timing in her collaboration with the programmers: confirm when…