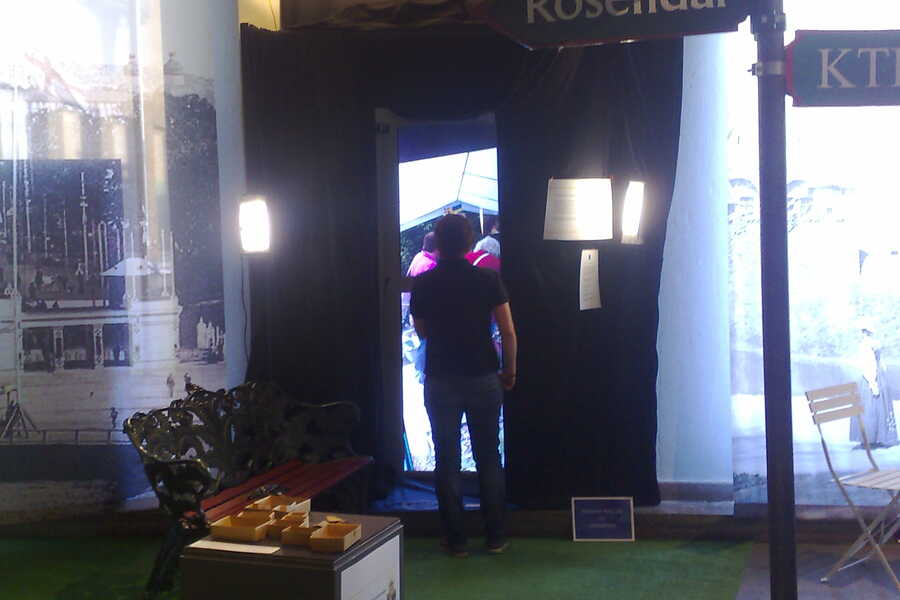 EIT ICT Labs will exhibit at CEBIT 2012, and I was asked to send some of our previous work to illustrate what Mediating Presence is. Watch a few film clips here; http://youtu.be/6m2-Jk8qWmE

2. THE MEDIATED CONFERENCE PUB
A mediated extension of the Resilience Conference in Stockholm to York, UK, in 2008

1. THE MEDIATED MUSEUM
The Museum of National Antiquities was temporarily extended
to an archaeological excavation site in 2008

Standing in the mediated door-way to the museum, the children at the excavation site show their findings to the archaeologist.
They found a piece of a coffee cup from 1897 and compare it to a similar artefact inside the museum.

The 'Mediated Glass-door' was designed for a mediated museum extension in 2008, when the Museum of National Antiquities in Stockholm was temporarily extended to an archaeological excavation, enabling museum visitors to interact remotely with archaeologists and passersby at the excavation site.
The excavation focused the remains from the renowned 1897 Art and Industry Fair, held in Stockholm.

2. THE MEDIATED CONFERENCE PUB
A mediated extension of a scientific conference in Stockholm
To York, UK, in 2008

An unprompted and spontaneous encounter resulted in a 40-minute mediated meeting by the bar. These researchers had scheduled a trip for a meeting, but cancelled since they happened to meet face-to-face at the conference. Instead, they arranged for another mediated meeting very soon.
The Mediated Conference Pub’ extended the Stockholm Resilience Conference to York, England, in 2008 as part of the Mediated Spaces research project at KTH Royal Institute of Technology.

Charlie Gullström - Hi, I will use this space to upload material that is relevant to our collaborative work within…

A Dialogue between smartphones and a DataVeil.