For such political spaces to work they have to give people an experience, as was my conviction in 1989. Having studied social sciences at the University of Amsterdam in the 1980s, my perception and ideas were deeply influenced by critical theory and especially by the German concept of 'Erfahrung' as was elaborated upon by Oscar Negt and Alexander Kluge (Negt & Kluge 1972) .note 88 Negt and Kluge argued that an 'Erfahrung', an experience, evolves when perception is formulated and is historically contextualized. By formulating perception and connecting this perception to the specific time and the specific place in which certain actors, driven by certain motives, act, one is able understand one's own position and perception much better. This facilitates a person acting upon this formulated experience in a more conscious way and therefore the action will have more impact and the person becomes an actor in making history instead of being victimized by it.note 89

When designing events one has to provide a space in which a person can formulate his or her experiences and one has to offer elements that will facilitate the historical contextualization. note 90 When designing networked events and applications one is actually designing processes that other people will have to go through. The characteristic of these processes is that participants will influence what happens, they will contribute, answer and invent things that cannot be foreseen.

Caroline Nevejan - In 1989 the goal of designing networked events, including the applications that were developed, was… 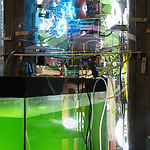 Caroline Nevejan - The GHP and the 0+Ball were two of the first events in a range of gatherings, and an inspiration to…