Once the programme had been drawn up, we had to reach out for our audience. It is a question of finding the right tone in the right places. The imagery (Max Kisman made the poster in which you see a dark blue universe with a black axe drifting through space), the language used, and the indirect connections, define how one can connect to existing networks. We had visited the Chaos Computer Club in Hamburg and were already collaborating with them, but we needed to approach other Dutch, American, European and global networks to let them know about this event. At the time there was Peacenet, Greennet, Geonet, a Dutch NGO Antenna, the BBS 'De Zwarte Ster' and there was HCC-net, the hobby computer club. But who was in France? So we went to Paris and met people from the magazine Terminal and UNESCO got them involved. Lee Felsenstein, one of the guests, announced the event on the Well in the USA. When creating an event one is also creating the audience. To create both the audience and the programme one needs ambassadors, one needs real connections, one needs bridges of trust, one needs 'social' interfaces. When we were online with the audience on the big screen, it was the perceivable relation between Crunch and the Russians that made the connection 'real'. This effect of the social interface was not intended at the time. It was just 'handy' if the person who knew the network could also demonstrate it and tell a bit about it. When people in the connected places recognised the people they knew and showed this, what happened became a true fact. It was in these moments that the effect of the social interface surfaced. When Michael said 'Hi Andy', or Captain Crunch said 'so what's up Sergei', we believed these connections were real. 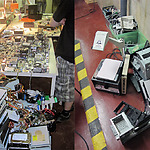 One of the main goals of Biomodd is empowering people to take control over consumer electronics.

Caroline Nevejan - In my memory, I can still see waves of audiences moving through the building during those three…