The building as a body or as an organ?

Nowadays the focus in architecture lies on buildings that foresee in their own needs, such as electricity, water, ventilation, heating and cooling. Architects try their best to make passive buildings sustainable. For example using sunshades to keep the heat out in summer and let the sun in during summer. Integrated windmills and PV cells are used to generate the needed amount of electricity. Heat pumps and underground heath storage are often used for generating cold and heat. High and low pressure, for example generated by wind is used for natural ventilation. In this position towards sustainability the building is treated as one organism that keeps itself alive.

Problems start when for example in cities some sites are not suitable for providing recourses as mentioned above. Some sites might be in the shadow of surrounding high rise buildings, leaving no opportunity for using PV cells. On the other hand the high rise buildings having more space for PV than they need on for example the façade or roof.  The ground might be unsuitable for digging, so that underground heath storage is no longer an option. Some buildings are simply too small to provide their own resources.

It might be a better idea to treat the buildings as organs of the body, in this case the city is the body. Every building in the city has a specific range of advantages and disadvantages compared to other buildings when it comes to generating a kind of sustainable source. A building with a huge surface on the façade directed to the sun all day could generate an enormous amount of energy for more buildings or organs than only itself. Another building having the same advantage but then directed to wind could make use of this position and provide energy for buildings that are not so ideally exposed to wind or sunlight. Spare heath produced by factories could be transported to all the organs. This can be done in more detail using waste materials of certain industries that could form the input for other industries. A good example is Superuse Architects from Rotterdam. They made a map of Rotterdam which shows all the in- and outputs of materials of different buildings. A map like this can be useful when trying to connect those material chains, reducing the amount of waste.

The city becomes like an ecosystem where every separate part has his own function and serves in their own way the rest of the city. 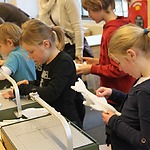 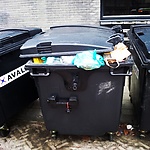 Klara Bergman - Listening to the lecture by Roel van Raak about waste management this week, I started to think…