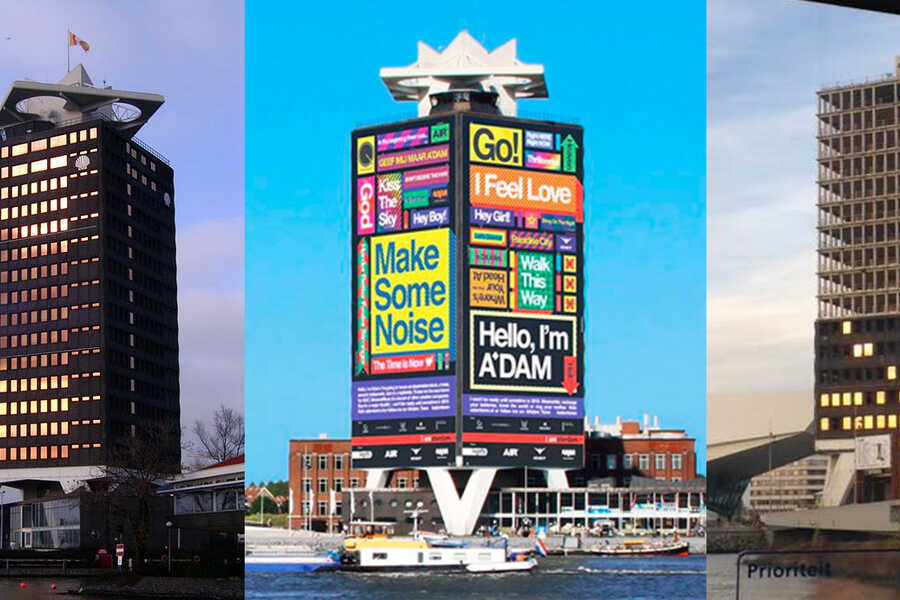 This week I was in Amsterdam for IDFA and while crossing the IJ river I was startled by the look of the A’DAM tower. As I remembered it, it was covered in large billboards with colourfull quotes. Now it was almost entirely stripped, even the viewpoint was removed. Only a part of the former façade which belonged to the Shell tower was still visible, with its blinded glass reflecting the sun. This made me think of the history of the building and what is going to happen with it now.

During the construction of the original building in 1966, the concrete floor was of poor quality and it had to be blown up with dynamite in order to pour the new floor. In 1971 the tower was finished and 36 years later they decided to leave the building. After a period of vacancy the building will now house a nightclub, hotel, office space, parking and much more. The former structure is reused and the façade is redesigned in style of the Shell tower.

The selection of the architects Claus & Kaan for the new design was based on several criteria. Firstly the façade of the building needed to be thoroughly renovated in order to improve the insulating capacity, reduce the energy use and the application of sustainable materials suchs as FSC wood, and recycled materials. Secondly, peak interior temperatures need to be prevented by optimizing the use of heat and cold storage. Thirdly, the municipality proposes to incorporate the generation of sustainable energy in the renovation of the roof and façade. Finally, they aim to reduce the amount of traditional parking places and ask for a vision on electrical transportation applications.

These criteria are being monitored by the municipality before, during and after construction. Making sure the Toren Overhoeks will set an example for further sustainable development in renovation in the city of Amsterdam, where traditional rules and regulations often form great obstacles towards climate neutral redesign.