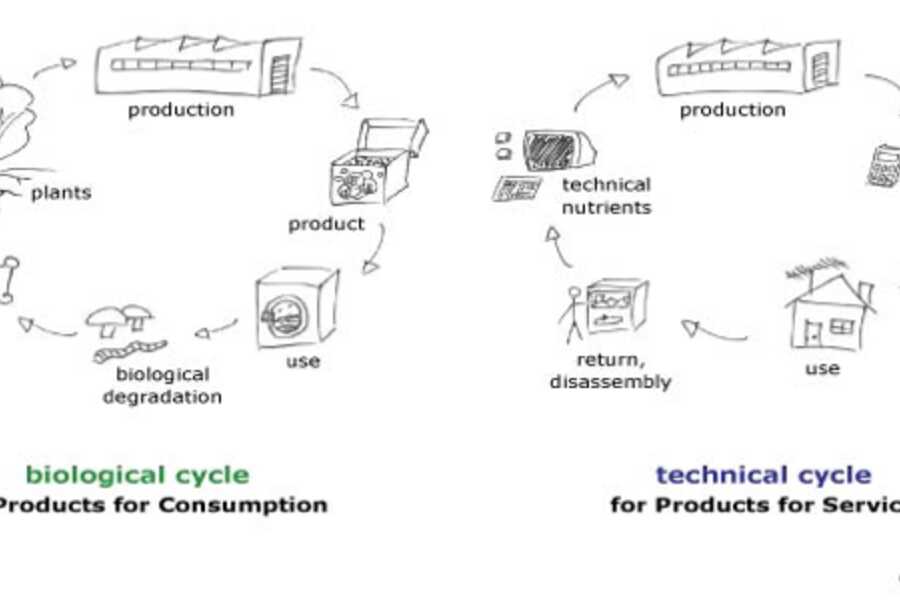 Within section 3.2.1 and 3.2.2, we will introduce the current Biocycle and Technocycle on the island. All products on earth can be considered to consist either of biomass or industrial mass. The first type can be used in the biocycle, while the second one can be used in the Technocycle. It should be noted that these two cycles are largely intertwined in the current system. To visualize this, let’s use the example of making a cup of coffee at home. Let’s assume that you have the classic coffee maker and no fancy Nespresso or Dolce Gusto apparatus. The first step would be to use water (biomass) that you put in your coffee maker (industrial mass). The second step will be to take the coffee filter (industrial mass, but biodegradable so it can be considered biomass too) from a package (industrial mass), then you will add the coffee (biomass) with a spoon (industrial mass) from a pack of coffee (industrial mass and biomass). You will then turn on the coffee machine and after a few minutes your coffee is ready. You might add some coffee milk (biomass) and sugar (biomass). Afterwards, you clean your dirty cup and you have to wash it with water and soap(can be either bio or industrial mass).

If we extend the example of drinking a cup of coffee to include the sources of the materials, it becomes clear how unsustainable just this little act of drinking coffee actually is. So far we have listed the following biomass materials: water, coffee filter, coffee, milk, sugar, soap. The following materials are regarded as industrial mass: packaging and coffee maker. In the next part we will expand on the biocycle and in section 3.3 we will analyze the technocycle.

Figure 3.4 below depicts how the biocycle and the technical cycle look like. We will consider the stages for each type of biomass.

Production - Starting with the production, we can analyze where all the products come from. Borrowing from our colleagues who analyzed the water cycle, we found that the water on Texel is stored in Den Burg, before that, it was transported from the mainland by a pipeline. On the mainland it was produced in one of the production facilities of PWN, for instance in Andijk. For the coffee filter, coffee, coffeemilk, sugar and soap we will assume that they are all bought at the Albert Heijn in Texel. The coffee (brand: Perla) could be produced in up to 15 different countries, and you can determine from the expiration date where the coffee originates (Rijksoverheid, 2014). These are countries from all over the world. The coffee milk is, if we assume that it is produced by Campina (like its website says), made in The Netherlands. For the sugar, we take Van Gilse sugar, which is also produced in The Netherlands according to the website of Van Gilse. The soap is a very complicated story; it is produced from several chemical components which are again produced in different factories. We could not find the origin of these products but the point we want to make; even a simple thing like making a cup of coffee is a very complicated process and although relatively a lot of products are made in The Netherlands, also a lot aren’t.

Figure 3.4 The biocycle and technocyle visualized


Biological degradation, nutrients and plants - We skipped the product and use parts since these are rather obvious and have been described. The biological degradation is in this example also fairly easy. After the coffee is finished, the body will process it to urine which will be flushed to the toilet. If we assume that this toilet is also in Den Burg, it is most likely that the urine ends up in the surface water next to Den Burg, visualized with a green triangle in figure 3.5 (source: Gemeentelijk rioleringsplan Texel). There it would further be processed by local bacteria, but it will never end up as resource for coffee plants in Brazil or sugar plants in the Netherlands. Eventually it might be processed by PWN back to drinking water.

The other thing that is left, will be the coffee waste in the coffee filter. This can be collected by HVC and composted as depicted in figure 3.3 of section 3.1.2.1. This composting process would happen in Zwolle and it first needs to be transported there.

Figure 3.5 Den Burg. The green triangle represents the place where the sewers end up in the land water.

Production - The packaging and coffee machine are considered parts of the technocycle. Packaging is usually done by an external party, for instance Halma Packaging in The Netherlands. This packaging has to be delivered at the food manufacturer and then transported to the Albert Heijn distribution centre. From there it will be distributed to the Albert Heijn in Den Burg.  Based upon an earlier assignment (a smartphone was analyzed in this assignment) for the course supply chain management, we try to describe the origin of the coffee machine. The coffee machine is, like almost every machine, probably assembled at a cheap factory in China. Its components (like the heating element) are created in other factories across the globe. The subcomponents for these components and the raw materials that these subcomponents consist of, are again produced around the globe.

Return, disassembly, technical nutrients.- If one is finished with the coffee machine, it can be deposited at the waste deposit ‘De Hamster’ if it’s broken, or at one of the second hand shops that have been introduced in 3.1.2.1. Eventually, the product will end up at the waste deposit and from there. After this, it is recycled by a so called WEEE recycler, for instance Recydur in Apeldoorn. Here, the coffee machine will be taken apart and all components will be further processed. This process is guided by European law. → link
The packaging will be discarded as general household waste, like it was introduced in section 3.1.2.1. After it has been transported to a waste incinerator, the packaging will be incinerated. There will be no possibilities for nutrient retrieval, although some heat is used for district heating in the surroundings of the waste incinerator. 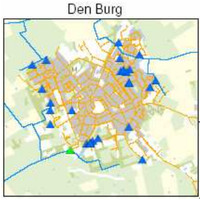