5.2 The flows of the waste streams 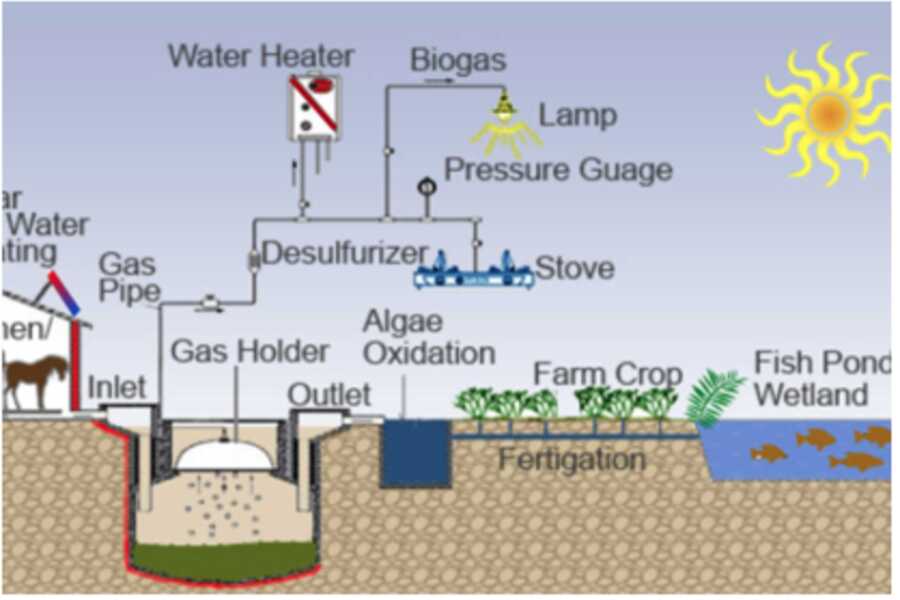 The system starts with the waste streams of households and the hospitality industry (the red circles in the lower part of the scheme). In this subchapter the subsystems (Agriculture, cattle breeding, worm farming, biodigester, mushroom cultivation and aquaculture) and supporting technologies are explained by following the journey of the different waste streams.

For harvesting, processing, roasting and brewing coffee only  0.2% of the coffee biomass has value on the market. The remainder, which is rich of caffeine is wasted, leads to generation of methane gas when left to rot and is therefore a contributor to climate change. The ZERI project of Gunter Pauli, guru of the Blue economy, did research in collaboration with scientist to find a purpose for this remainder. Growing mushrooms on coffee ground also stimulates mushroom to pop out after three months of seeding, instead of the 9 months for Shitake or Ganoderma. Bacteria control of farming mushroom requires high energy costs. However ground beans have been exposed to hot water, when brewing a cup, reducing bacteria to a minimum. Farming mushrooms on coffee is therefore 80% more energy efficient (Pauli,2014).

The grown mushrooms can be used for food for the hospitality industry or cattles. Mycelium can be extracted out of mushrooms as a resource for bioplastics, biofuels and biodigesters. Leftovers from mushrooms during the process can be composted and function as a fertilizer again (Rotterzwam, 2014). This process not only generates food out of waste, but supports the biodigester or biofuel production as well. In this way it contributes to self-sufficieny of energy, which is a goal of Texel. The mycelium can even be used as a resource for bio-plastics which can be distributed to the shops and supermarket as renewable packaging.

The fruit and vegetable waste can be composted with the help of worms. To make sure there are enough worms for composting a worm farming facility is needed to reproduce enough worms. The worms digest the fruit and vegetables to a fertilizer. This again can stimulate products of new food crops. Since cooked food can contain dairy and milk it is not advised to give cooked food to worms as well, because worms dislike this food and will not eat it. Because of this, this is left to rot which can  attract flies. The same counts for acidic fruits such as citrons (Hungry bin, 2014)

With aquaponics, a floating bed of plants is placed on the ponds with fish (Mediamatic, 2014). Fish manure which contains ammonia is toxic to the fish. The water with ammonia, is pumped into the floating bed of plants. Here, bacteria transform the ammonia in a form which is a fertilizer to the plants. The clean water is returned to the fishtank (TheAquaponicSource, 2013). Any freshwater fish and any plant can be used. This gives opportunities to cultivate plants which can be used for the hospitality industry. Figure 5.2 shows the bio-cycle used in aquaponics.

The worms of the worm farm not only function for composting organic waste. They can filter water as well. Researches of the ZERI-project made a bio filter out of earthworms that can support the development of small scale water treatment plants. With this chlorine can be prevented, since the filter of worms is able to cleanse the water without creation of any sludge. The filtered water can be used for irrigation of crop fields or can even function as water for cattle depending on the quality of water (Pauli, 2014). These processes give touristic opportunities to explain such processes and explain more about worms and soil. The facility can become a learning center.

Cooked food can be given to livestock as food. Although pigs are omnivores there is certain regulation on what you can give and not give to animals. More in-depth research on this must be done. The digested cooked food is converted into manure, which is a resource for the bio digester.

When the manure is collected in the digester, water is added to create a slurry. The anaerobic process start, where bacteria transform the mixture into methane gas and high-grade liquid fertilizer without the presence of oxygen (Scitech,2013). The high-grade liquid fertilizer, that is left after anaerobic digestion is called slurry. The methane gas can be used for cooking, which can be distrusted to the hospitality industry to cook food. Methane gas can also be used for running an internal combustion engine. It can therefore be used to transport waste from one place to another. Figure 5.2 displays the process of the bio digester.

The liquid fertilizer can be used for land or aquaculture. In water the liquid fertilizer as a higher density, making it sink to the ground. The slurry flows to algae ponds, mineralizing the biological matter. It converts water into highly alkaline water that creates an ideal nutrient balance to feed benthos, phuto and zoo-planktong. This in turn leads to dykes, which are covered with grass. The grass and plants can be harvested, which can be fed to livestock again (Pauli, 2014).

Since seaweed is algae the liquid fertilizer can also be used for the Seaweed Center of NIOZ. This research center is doing research to seaweed since it as high potential as a food source for humans and animals and to generate other cash flows such as resource for the pharmaceutical industry. This creates a connection with the healthcare industry (NIOZ, 2014). The NIOZ is centered on Texel. Since it does research to marine life it fits the core value of maritime monuments.

Cardboard waste of shops, hospitality industry and households can be shredded a used as horse bedding as is already done in the ‘Cardboard to Kaviar’ project. Once the horse bedding is dirty it can be added to the mixture with manure for the bio digester, so it can be transformed into biogas and fertilizer.

Figure 5.2 The processes in a biodigester