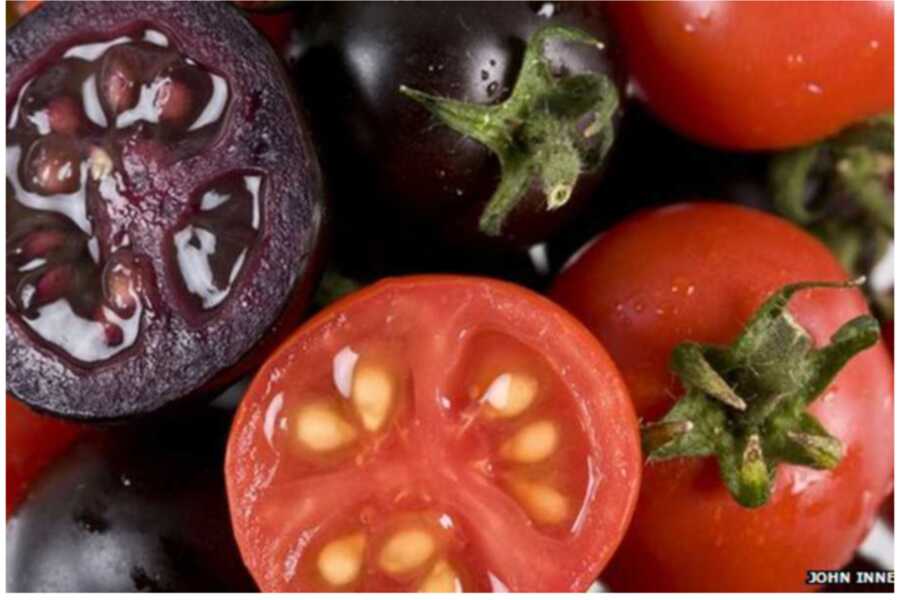 Food is for everyone in the world important: it is our primary need. The safety of the food is key, as is the quantity of the harvest in order to feed all mouths. The world population is growing and in combination with increasing failures of harvests (due to floods and droughts) a future food crisis is not an unrealistic scenario.

Grain that is resistant to drought, rice that can survive floods, improving the photosynthesis of rice to double the harvest: it would be fantastic right? Actually these products already exist, they problem is that they are genetically modified (GM) and therefore controversial in the Netherlands. GM crops are plants that have been altered to do things they normally wouldn’t do. For example the purple tomato: it is healthier, lasts longer and tastes better than normal tomatoes (BBC, 2013). GM crops can increase the efficiency of our fields and prevent failed harvests. Respected and independent research centres have proven that GM crops can contribute to a sustainable food production (Fresco, 2013).

The European Union (EU) differs from most of the world in its strong opposition to the use of genetic modification in agriculture and this position has worsened over the past 15 years (Fresco, 2013). The process of getting a genetically modified (GM) crop in production is very time-consuming and full of bureaucracy. The EU keeps on fighting against GM crops because genetic modified food would be intrinsically dangerous. The debate about GM crops looks polarized: you are either fully against, or you are all for.

The opponents of GM often talk about the big companies (see these articles about Monsanto: vroegevogels or modernfarmer) the patents, the poison and the monocultures(Vloemans, 2014). The debate is about good versus Evil, Organic versus Artificial. Organic products are considered as good and healthy, while GM products as scary.

I think that we have to ‘embrace’ the GM crops in order to create sustainable food production. I agree that the monopoly of Monsanto is scary and that patents on crops endanger the safety and availability of our food, but that doesn’t mean we have to write off GM crops. We have to consider GM crops as the answer on the food production problems, and make the correct and integer rules and regulations. Let’s genetically modify our food!