We may notice another person in a group when they are not in sync with everything else. In a study of a group of students collaborating on a project, it was found that when one person’s body goes still for longer that it is supposed to, it becomes noticed (Gill and Borchers 2004). Only one person needs to notice in order for the rest of the group to become aware. Awareness here is peripheral awareness, and in this example, of a change in the spatial temporal trajectory of the group flow. It may be that to witness, the person that is being witnessed has altered something in the temporal dynamics of the group and the environment.

One possible way to analyse this phenomena would be kinesics which is about the movement patterns of the body (Birdwhistle 1970). One of the early founding researchers of kinesics, Scheflen (1973, 1974) was interested in events that go on between two or more people and where changes in movement and posture really mark boundaries of interpersonal events. For instance, at some point in the conversation, one person changes their position, shifts weight, or something and the others follow suit. This change usually marks a change in the nature of what has been happening amongst the participants; it is not ‘just a move’, but a move that in context has a distinct meaning. This meaning is a signal marking the end of one kind of event and the start of another, a boundary between two kinds of exchange. To study this kind of interaction, the focus is not simply on the actual form of any one gesture, posture, or expression but rather on the changes in motion, posture, expression, and arrangements, and what kind of communicative flow these changes have in the dyadic (or multiple) flow of events between people.

Kendon (1972, 1990), Condon, and ET Hall have all been influenced by kinesics, with Condon continuing this research throughout his life, such as his work on synchrony and pathologies, and mother–baby interaction. Their work has been an important influence on the study of time and rhythm in kinesics in human interaction to reveal behaviours that are occurring without us having an explicit awareness of them yet impact on the ways in which we perceive and understand or misunderstand each other. 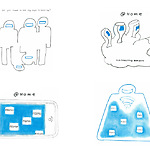 How can I play with online trust? How does my body trust you online? How can I use ‘trust buttons’?