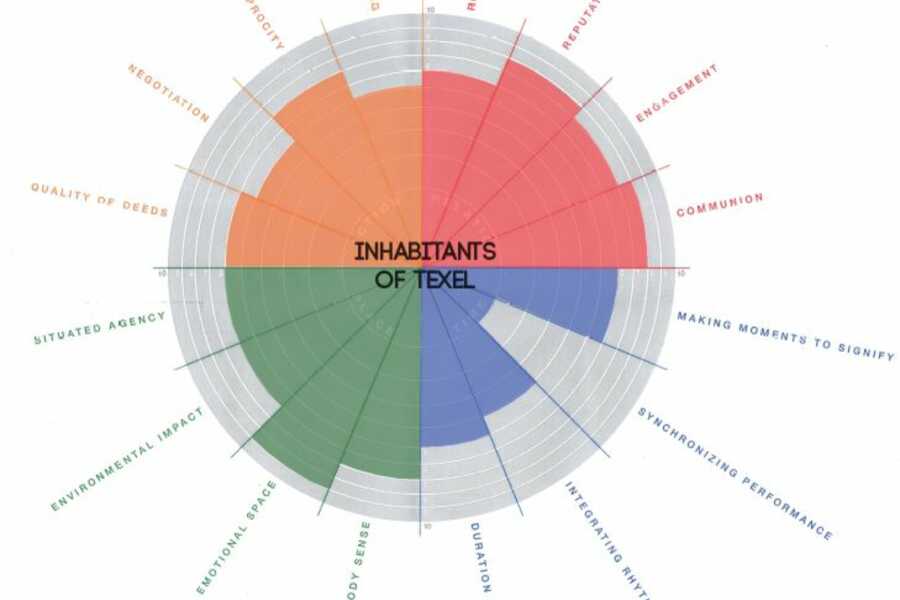 When we take a look at the YUTPA analysis of current values we see that the inhabitants of texel values are quite well distributed among especially three of the four themes. Time is the only theme which is significantly lower than Action, Relation and Place. Some of the higher values that can be found in this analysis of the current system are Emotional Space, Communion, Reputation and Reciprocity. The high values for Communion and Reputation can be traced back to this strong community feeling that the Texelaars have, whilst Emotional space has to do with the sense of being on an island. Reciprocity is one that is related to the fact that people, in general, are more inclined to do something if they get something in return that benefits them in the short run.

When we take a look at our proposed future values, we can see a large shift in values for the Texelaar. The values for the themes Relation and Place have been improved slightly, but the major differences can be found within the themes Action and Time.

Within the theme of Action, values for negotiation, reciprocity and tuning have dropped significantly, whilst the value for Quality of deeds has increased to a maximum. In our future subsystem, the Texelaar is not always busy on thinking about short term benefits, but more about long term benefits for themselves and their island. This means the values for negotiation and reciprocity have decreased since people do not necessarily need something in return for the actions that they perform.

The theme of Relation has an overal improvement, but it is very important to note the decreased value for the Texelaar to have a specific role. In our future subsystem, everybody can have ideas benefitting sustainability.

The theme of Time is where our largest changes can be found. Our aim is to make sustainability a part of the Texelaars daily routine. Therefore, values such as Duration of engagement, Integrating rhythm and Synchronizing performance have been increased. Making moments to signify is also increased, so that the Texelaars can commit to certain milestones related to sustainability, and celebrate when they have reached these milestones.

Values in the theme of Place are all increased slightly. Since Texel should become self-sustaining, the feeling of being on an island will increase. 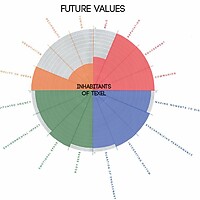