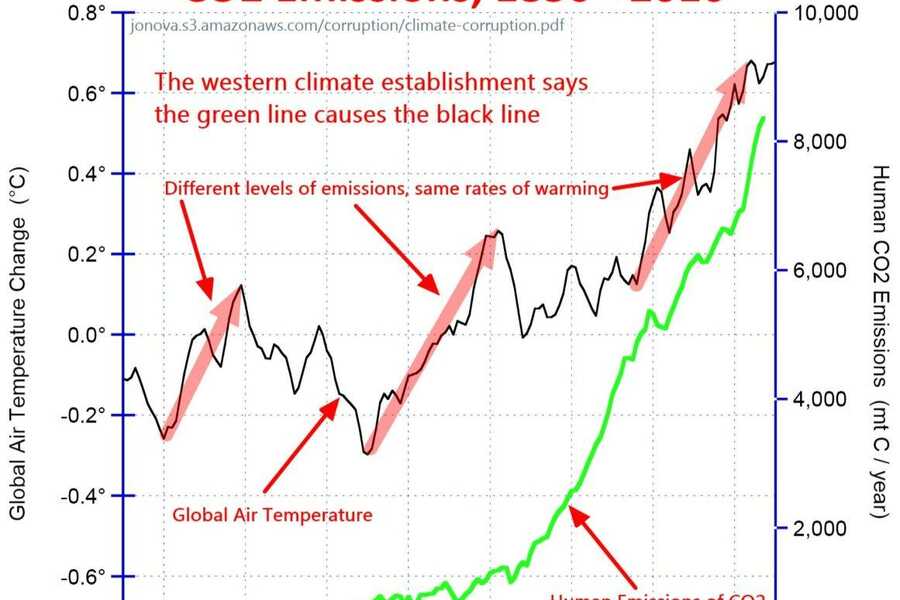 There’s been a massive hue and a cry about global warming being an issue that will be detrimental for the lifestyle of the future generations and how rise in CO2 is correlated with this proposition. It is an undeniable truth that global warming is a reality; the world is heating up the temperatures are rising and the polar ice caps are melting. But have we got the reasons right? Can a rising level in CO2 be the major cause of concern for Global Warming?

Eminent personalities such as Al Gore have the world convinced that a rising level in CO2 is the primary cause of concern.

However, from the figure shown below the dull red arrows depict a rise in global temperature. Typically there are 3 and the CO2 line is shown in green. The green line is more of a steady increase from 1850 – 2010. On the other hand there is a rise and fall in temperatures thrice. This shows that green line does not relate to the black line.

So then, what is causing global warming? The rise in temperature from the 1960 – 2000 is almost 0.6oC. What has changed in this time? The population has increased exponentially causing a rise in need of transport, power and amenities. The latest investigation by Eui-Seok Chung states that water vapour is the major cause of global warming [1].

The effect water vapour has on Global Warming is almost double that of CO2 [2]. Water vapour rises and settles in the troposphere and then prevents long wave re-radiation of the land during the night from leaving the atmosphere and allows short wave radiation to enter in during the day. Similar to a greenhouse. This creates a positive feedback loop which causes the amount of global warming to increase in an exponential rate.

Not only water vapour but CFC’s were a major player as well as they react with Ozone to break it down and further increase Global Warming. However, with the successful sanctions on this chemical the levels of CFCs being produced have drastically reduced.

Though the battle to reduce Global Warming and combat polar ice caps from melting is going on there needs to be new direction to answer the relevant questions. Even if the direction is right there is a lack of support from the governments. Possibly when the axe is on our heads the governments will pump in money for research and Global Warming can finally reduce.