At the GHP I was actually surprised so many times by the trust people placed in each other, which became clear to me because people put a lot of effort into trying to make connections work. It was a generous giving of time, mobilising expertise to make communication happen. I found that beneath the visible communication a network of trust between people, and a network of trust in the technologies, made everything happen. Rop Gonggrijp, when reviewing this text, specifically mentioned the way he was trusted by Marie de Baat, one of Paradiso's technicians, when he needed to 'rewire' the building to be able to produce and to host the GHP. Paradiso had no Internet access at the time, international phone calls were very expensive and Gonggrijp had to use audio cables to re-route the telephone lines. How far may the incidental needs of a specific programme interfere with Paradiso's structural infrastructure? Paradiso's own technicians did not know how to operate these new technologies at the time. Because Marie trusted Rop the two of them arranged for him to do it and for him to restore it afterwards.

When one is not in the same place at the same time, when one wants to connect via mediated presence, this conveying of trustworthiness is a very different issue than when conveying trustworthiness in natural presence. A lot of the networks that were shown on the GHP were also people's networks, meaning that they were grounded in regularly meeting each other IRL (In Real Life), in natural presence. Also, some of the political networks and the university network were embedded in large organizations and institutions, which guaranteed a certain trustworthiness since they were also approachable and could be held liable even in court, for what happened in the networks.

Caroline Nevejan - In the Foreword to the conference proceedings on 5 October 1989 I wrote: "Through combining these… 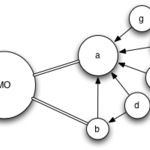