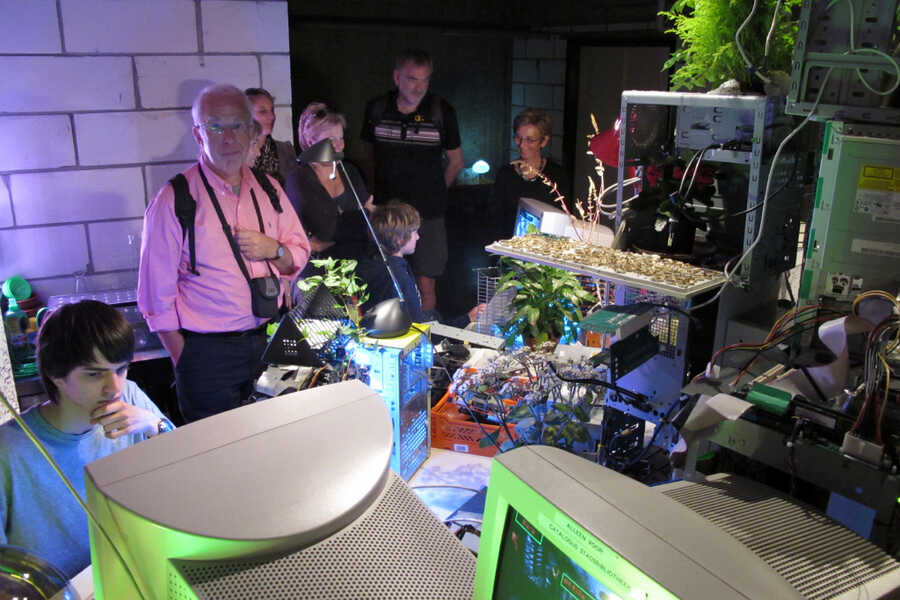 This particular workshop was in effect the first try-out of the Biomodd Workshop format. The two former Biomodd projects in Ohio and the Philippines took respectively 4 and 8 months (including exhibitions). The goal of the Biomodd Workshops is to introduce people to the core concepts of the project and build an art installation over a much shorter period of time.

To achieve fast results, the group was split up in smaller working groups, usually consisting of people that joined the workshop together. Each working group then explored their own idea about connecting computer electronics and biological life on a compact scale. This approach contrasted with the longer Biomodd projects where the whole team worked around a much larger central structure.

The participants in the Biomodd Workshop in Sint-Niklaas became autonomous very quickly. Each working group focused on their own creation without a continuous need for guidance from my part. The skill to connect computer electronics was acquired very rapidly, and troubleshooting occurred largely through personal experimentation and peer feedback. 'Liquid War', the open source game that was used throughout the workshop and exhibition, was selected by the participants themselves. It was a game I previously had no knowledge about, with specifications perfectly suited for some of the older hardware we were using. The game environment – essentially maze structures used as battle arenas – was immediately modified to personal taste. In a witty and ironic gesture, the logo of one of the former Biomodd versions was transformed into one of the most popular virtual battlegrounds (or so-called 'maps'). I only made one request: no (cliché) first-person shooting. And 'Liquid War' is exactly that: a top-down 2D world in which each player represents a dynamic 'liquid' trying to overtake his/her opponents by enclosure and osmosis.

Apart from the explicit collaboration it was also apparent that individual participants started carving their own niche throughout the workshop (without loosing sense for the overall project): Thomas took care of all Linux/Ubuntu aspects; Jorrit became a enthusiastic game modder; Pablo, Wim and Pieter specialized in water cooling; Mathias took care of outreach and sponsorship. With productivity and troubleshooting becoming way more efficient, this automatic specialization greatly benefited the workshop.

During this workshop there were different interconnected levels of witnessing and collaboration at work. My father and his partner contributed to the event in their very own way. They own a thrift store in Sint-Niklaas, and borrowed a whole range of materials such as glass ware and a vertical artificial aquarium. These materials became an integral part of the final setup as it was displayed during the Coup de Ville arts festival. The municipal library where the workshop took place was also very supportive throughout the whole project, including the exhibition. Apart from providing us with adequate space and infrastructure, we received full access to their surplus storage. This turned out to become a treasure for the workshop with all types of structural elements that defined the final installation. The workshop was also an opportunity for me to share my past experiences abroad – the Biomodd projects in Ohio and the Philippines – with my own hometown. Apart from a relatively small photo exhibition about 15 years ago, I had never actually shown any of my cross-cultural or bio art projects in Sint-Niklaas. Sharing the workshop experience, the resulting installation, and the broader context of Biomodd allowed my hometown community to get a better grasp of my art. This happened mainly through impromptu talks and explanations by myself while doing maintenance work in the installation. Eisa had been part of the Philippine Biomodd project and as such could help evaluate the success of the new workshop format. As such, she has been instrumental in giving feedback for this particular contribution for Witnessed Presence. The final art installation, which was essentially a hybrid computer network running a multiplayer game, proved the most popular art work of Coup de Ville for the young (high school) generation. Both the concept and aesthetics seemed to readily appeal. The fact that visitors could actually engage with the art work by joining the multiplayer game environment most probably contributed to the work’s success. People felt like they could actually become part of the installation, even if it was only for a short time.

Embedding multiplayer gaming in Biomodd is a very deliberate choice and one of the art work’s core characteristics. It not only virtually and physically engages the visitor with the installation, it also engenders a very specific type of engagement with other visitors. Visitors are turned into 'players' in a shared virtual environment. Through this, visitors immediately become connected in a temporary ad hoc community in which communication and interaction become crucial. In contrast with popular belief, multiplayer gaming is not an introvert activity – participants usually start shouting instructions, warnings, disappointments and congratulations to each other. In Biomodd this becomes a performance – and an invite – for the onlooking visitors. An art work within an art work. 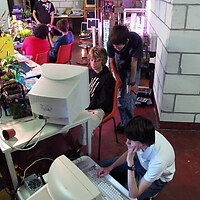 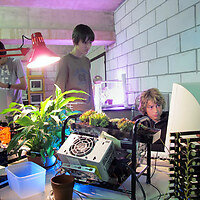 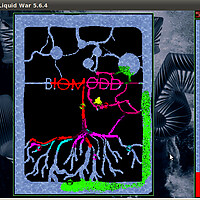 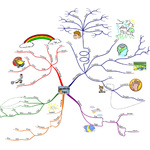