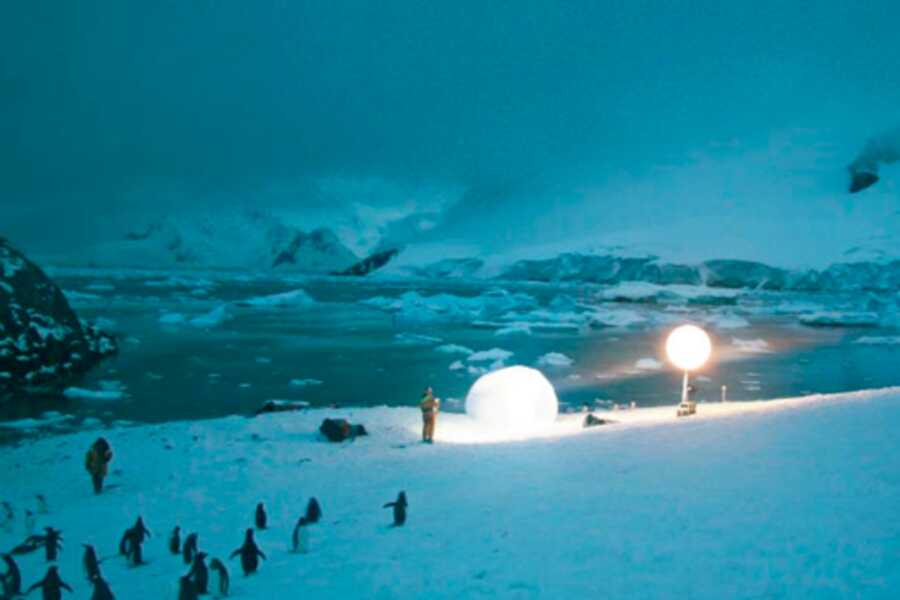 Now, Huyghe’s A Journey that wasn’t evokes fiction by its title alone because of its poetic denial of a certain expedition that appears to have happened. The expedition in question is an actual trip to a “non-topographical island” somewhere in the Antarctic in search for a rare species, an albino penguin, about which Huyghe had heard and read. So, Huyghe and his team — seven artists and ten crew members — traveled to Antarctica, where they set up a research station as the home base for their expedition, which was then undertaken on both foot and with a speedboat. The voyage might be less poetic as it sounds at first, because in Huyghe’s account global warming has melted away the poles' ice shelf and created previously non-existing islands and ecosystems. So, the blend of imaginative fiction (a journey to the “unknown,” “unknown species,” etc, evokes all sorts of expedition stories) and bare reality (the effects of the climate crisis, as vividly depicted in Al Gore’s An Inconvenient Truth) is already conceived in the idea of the project. This journey — that did take place — initiates the first phase of the project, A Journey that wasn’t.

The second phase of this real-time event consists of a representation of the trip in the form of a musical staged on the ice skating ring in Central Park, New York. Huyghe has described this part as “the typography of an island in musical form.”(25). In order to realize this artistic translation of the journey, he transfered the sounds and shapes of the island into morse code, which subsequently determined the format and shape of the artificial icescape in Central Park. Staging pitch black rocks of ice and using spectacular atmospheric and lighting effects, the musical (based on an original score of Joshua Cody, a composer who studied with Pierre Boulez and Louis Andriessen) was performed live in the park by a symphonic orchestra.
Yet the end product of the journey to Antarctica and the spectacle in New York is a film, which is thus based on the footage of the real journey and the fictionalized multimedia show, woven together into a series of episodes that create an intense dialogue between natural and witnessed presence and mediated representation. After a concise prologue by a voice-over, who recapitulates the film as “the story of a tragic odyssey,” images that serve as proofs of the expedition’s presence in the extreme environment of the Antarctic and images of the mise-en-scene in Central Parc are juxtaposed to set the scene and disclose the structure of the film. Then longer episodes of the journey — the sailing boat trying to clear a path through the iceberg laden waters, whales appearing and disappearing on the surface of the sea, the setting up of the research station — are alternated with scenes of the theatrical set up in Central Park, such as shots of the dramatically staged Arctic landscape, the orchestra and the audience. The ‘story’ develops in each episode of the two sharply contrasting yet closely related sets of images: on the one hand the journey to and landing on the island, the installment of the campsite with its meteorological apparatus, the search of the albino penguin — all in vintage documentary style; on the other the carefully orchestrated opening of the whole set up of the open air musical in its urban surroundings to the dramatic start and unfolding of the concert.

Huyghe’s A Journey that wasn’t brings to mind Broodthaers’s film, A Voyage on the North Sea, and not just because they share the word “journey” in their title: there is something about the deeply inter-media approach in both works, plus the relation to metaphor, that seems to bind them (26). Broodthaers’s work shows a variety of boats, drifting on the sea (a modern yacht, a traditional schooner, a life boat) on an displayed strip of film. The interesting part of the work is that it intelligently plays out the conventions of various media, such as a book (see the shots with only the word “page” on it, combined with a number), painting (shots of painted boats, and close ups of a bare canvas), and, obviously, film itself (on the verge of photography because of its use of still images). This intermedia condition of the work is the reason why Rosalind Krauss mobilizes it to elaborate on her idea of “art in the age of the post-medium condition” (Krauss 1999). Krauss’s approach to her own diagnosis is rather paradoxical because on the one hand she argues that art has reached the stage of “the post medium condition” and yet on the other she defends the concept of medium — albeit not in the classical Greenbergian sense of material conditions but in the revised form of the (immaterial) “medium-as-idea.” The crux of the argument, which relates to my analysis of Huyghe’s project here, is that Broodthaers is devoted to one specific medium throughout his work, namely the “master medium” of fiction (Krauss 1999, p. 46). For Krauss, in other words, Broodthaers’s relation to fiction goes deeper than simply using it as a strategy in some of his best-known works to demythologize conventions, such as in his célèbre Museum of Modern Art: “What is at issue in the context of medium is not just the possibility of exploiting the fictional mask to unmask reality’s lies (here Kraus refers to Broodthaers’s fictional museum), but of producing an analysis of fiction itself to a specific structure of experience” (1999, p. 47). This significance of fiction as a gateway into (aesthetic) experience is applicable to Huyghe’s whole multi-media project as well, which coalesces in the film A Journey that Wasn’t. Like Broodthears, Huyghe does not tell a story but rather displays the condition of its narrative. The film begins with a voice-over statement that it will “prolong the experience of the journey” but in the process, and through the use of fiction, the multi-media project lays bare the structure of experience as it occurs in the hybrid configurations of natural, mediated, witnessed and fictional presence in media society.

Note 26: Another artist with whose work Huyghe seems to engage in an intense artistic dialogue is Robert Smithson. This is not the place for an in-depth analysis of the interrelations between Smithson and Huyghe, but it is clear that Huyghe’s project in the antartic relates to Smithon’s The Spiral Jetty in many ways. Both artists went to a distant place to produce their art within raw nature, far from the cultured artworld, and both then brought a representation of the work back into civilization. Issues of presence and representation, or site and non-site in Smithson’s terminology, are at the heart of both works. It is also notable that in the work of both artists the idea of process, or the making of the work as a temporal event, is crucial. In an essay on The Spiral Jetty of 1972, Smithson describes in great detail the proces of finding the right location for his work, the journey to that place, the making of the work with tons of basalt blocks and earth and big trucks. Smithson also emphasizes in text and image (i.e. in films about The Spiral Jetty) the importance of experiencing “the fluctuating scale” (not just the size) of the work while walking on it — natural presence, our own physical body, in that particular space in Utah at a certain time, is thus central to the work. Finally, the work of both Smithson and Huyghe has an intermedia character in the sense that they both use a wide variety of media to represent the work and experience it in different ways. 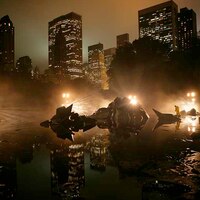 The Tree of Love

Kadir van Lohuizen - There she stands, a lonely tree in a forest of concrete. She seems healthy though, full of leaves.