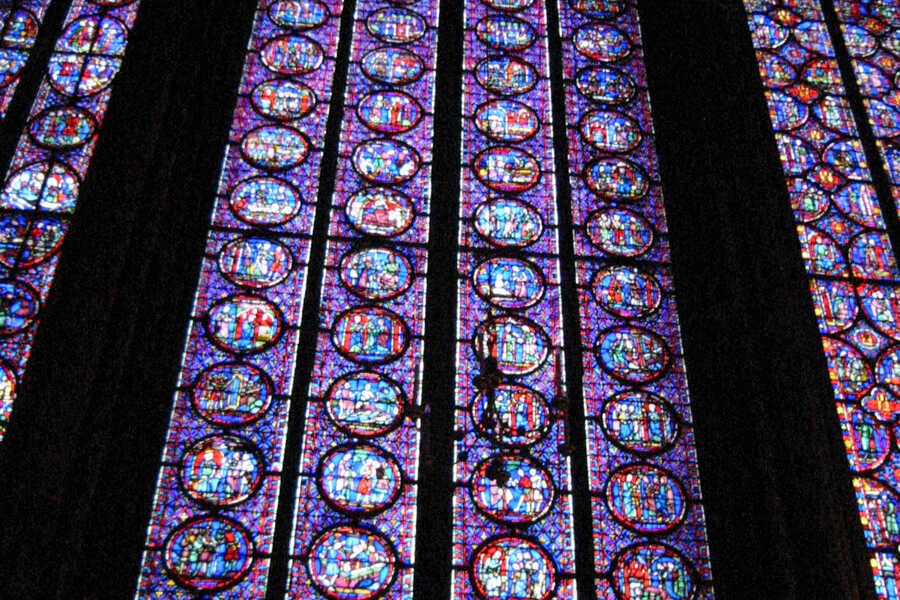 It is well known that panes of stained glass in old European churches are thicker at the bottom because glass is a slow-moving liquid that flows downward over centuries.
Well known, but wrong. Medieval stained glass makers were simply unable to make perfect flat panels, and the windows were just as unevenly thick when new.

The tale contains a grain of truth about glass resembling a liquid, however. The arrangement of atoms and molecules in glass is indistinguishable from that of a liquid. But how can a liquid be as strikingly hard as glass?
"They are the thickest and gooiest of liquids and the most disordered and structureless of rigid solids," said Peter Harrowell, a professor of chemistry at the University of Sydney in Australia, speaking of glasses, which can be formed from different raw materials. "They sit right at this really profound sort of puzzle."
Philip W. Anderson, a Nobel-prize winning physicist at Princeton, wrote in 1955: "The deepest and most interesting unsolved problem in solid state theory is probably the theory of the nature of glass and the glass transition."
He added, "This could be the next breakthrough in the coming decade."
Thirteen years later, scientists still disagree with some vehemence, about the nature of glass.
Peter G. Wolynes, a professor of chemistry at the University of California, San Diego, thinks he essentially solved the glass problem two decades ago based on ideas of what glass would look like if cooled infinitely slowly. “I think we have a very good constructive theory of that these days,” Dr. Wolynes said. “Many people tell me this is very contentious. I disagree violently with them.”
Others, like Juan P. Garrahan, professor of physics at the University of Nottingham in England, and David Chandler, professor of chemistry at the University of California, Berkeley, have taken a different approach and are as certain that they are on the right track.
“It surprises most people that we still don’t understand this,” said David R. Reichman, a professor of chemistry at Columbia, who takes yet another approach to the glass problem. “We don’t understand why glass should be a solid and how it forms.”
Dr. Reichman said of Dr. Wolynes’s theory, “I think a lot of the elements in it are correct,” but he said it was not a complete picture. Theorists are drawn to the problem, Dr. Reichman said, “because we think it’s not solved yet — except for Peter maybe.”
Scientists are slowly accumulating more clues. A few years ago, experiments and computer simulations revealed something unexpected: as molten glass cools, the molecules do not slow down uniformly. Some areas jam rigid first while in other regions the molecules continue to skitter around in a liquid-like fashion. More strangely, the fast-moving regions look no different from the slow-moving ones.
Meanwhile, computer simulations have become sophisticated and large enough to provide additional insights, and yet more theories have been proffered to explain glasses.
David A. Weitz, a physics professor at Harvard, joked, “There are more theories of the glass transition than there are theorists who propose them.” Dr. Weitz performs experiments using tiny particles suspended in liquids to mimic the behavior of glass, and he ducks out of the theoretical battles. “It just can get so controversial and so many loud arguments, and I don’t want to get involved with that myself.”
For scientists, glass is not just the glass of windows and jars, made of silica, sodium carbonate and calcium oxide. Rather, a glass is any solid in which the molecules are jumbled randomly. Many plastics like polycarbonate are glasses, as are many ceramics.
Understanding glass would not just solve a longstanding fundamental (and arguably Nobel-worthy) problem and perhaps lead to better glasses. That knowledge might benefit drug makers, for instance. Certain drugs, if they could be made in a stable glass structure instead of a crystalline form, would dissolve more quickly, allowing them to be taken orally instead of being injected. The tools and techniques applied to glass might also provide headway on other problems, in material science, biology and other fields, that look at general properties that arise out of many disordered interactions.
“A glass is an example, probably the simplest example, of the truly complex,” Dr. Harrowell, the University of Sydney professor, said. In liquids, molecules jiggle around along random, jumbled paths. When cooled, a liquid either freezes, as water does into ice, or it does not freeze and forms a glass instead.
In freezing to a conventional solid, a liquid undergoes a so-called phase transition; the molecules line up next to and on top of one another in a simple, neat crystal pattern. When a liquid solidifies into a glass, this organized stacking is nowhere to be found. Instead, the molecules just move slower and slower and slower, until they are effectively not moving at all, trapped in a strange state between liquid and solid.
Read the rest of the article by Kenneth Chang, published July 29, 2008 in The New York Times: www.nytimes.com/2008/07/29/science/29glass.html 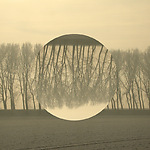 Anna Carlgren - When looking at this picture at least three convex lenses are involved. In the human eye (1), in…