People manage their identity online, and this is often time consuming. Professional life depends increasingly on keeping virtual identities going. The use of technology is deeply defined by class and culture; the use of technology in the bottom segment of society is critically different from the elite. The elite sector, which is geared towards going up the social ladder, is focused on personal assets: personal memories, life blogs and pictures. People at the bottom of the pyramid, however, are looking for sharing, connecting, collaborating and creating ‘oneness to go forward’ (interview Narayanan 2008).

Human beings give trust to systems and base their trust on systems as well. Basic trust in a system is required to operate and participate. Negotiation of trust is often needed with many different parties, including software and hardware providers, network providers (interviews van Splunter 2009, Abarham 2008). Governance ‘of’ communication systems (ownership and regulations, agency of regulation) and governance ‘through’ communication systems (with information transactions, accountability, transparency, efficiency) both fundamentally define possibilities and consequences of participant’s acts online (interview Parthasarathi 2008). Much initial trust in technology is based on ignorance and perception instead on reality and analysis of the implications of its use (interview Abraham 2008). Negotiation between transactions and interactions in online reality has different dynamics than in offline reality. This affects human agency profoundly. Tuning presence for action in online environments is the result of a conscious exchange of transactions. However, failure sometimes occurs. Human beings deal with failure with their hearts and their minds. Technology deals with failure as a statistic. Technology can provide data as input for decisions, but the meaning of data is contextual and technology can only partially know (interview Narayanan 2008). Information has become more readily available in current networked societies. People are continually informed about the state of the world and may feel witness to what is happening in the world. However, the implications of vast amounts of information for the ability to act are still unknown. (interview Parthasarathi 2008). 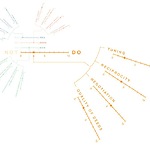