This week we will be visiting Rotterdam. We won't be able to visit the Club WATT unfortunately, because it shut down. It was a club where the energy of people dancing was used to power the club itself. This is a great sustainable idea, and I remember that I calculated the impact in my first year of physics. This back-of-the-envelope calculation would go something like this:

Say, we have people all waying on avarage 70 kg, a reasonable expectation in a club. Dancing is a complicated movement, but say we all just jumped instead of dancing, which is somewhat like dancing. Let's say, we jump very enthousiastically and raise our centre of gravity 15 cm each time we jump/walk, this is maybe a bit much but we're in a club, so we'll go with it. In this club they say they 'convert kinetic energy as efficiently as possible', we can assume an efficiency of about 10%.

If you jump up and down you use energy, the energy to raise your centre of mass with the 20 cm's we discussed before. Our average person would then use about 105 J to do this, what would give 10 J to the floor. If we would jump once a second, what we won't be able to do for very long, we would generate 10 W per person. This is enough to power one tiny lightbulb.

The club had enough space for 1300 people on the floor. If, on a very busy night, a quarter of these people are dancing at a time (the other people are either getting a drink or too tired from dancing so much), their dancing would generate about 3 kW. We could power two smoke machines! [1] Okay, if we would dance twice as hard (we're saving the world from climate change - we should put our backs into it)  we could power the DJ set as well!

I think this short and easy calculation shows the problem with sustainability. Even though the idea is great, you should really do a calculation before assuming ecofriendliness.

Nora - Definition of the actors important to the subsystem

Energy and Farming on the Texel Island 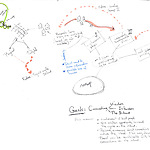