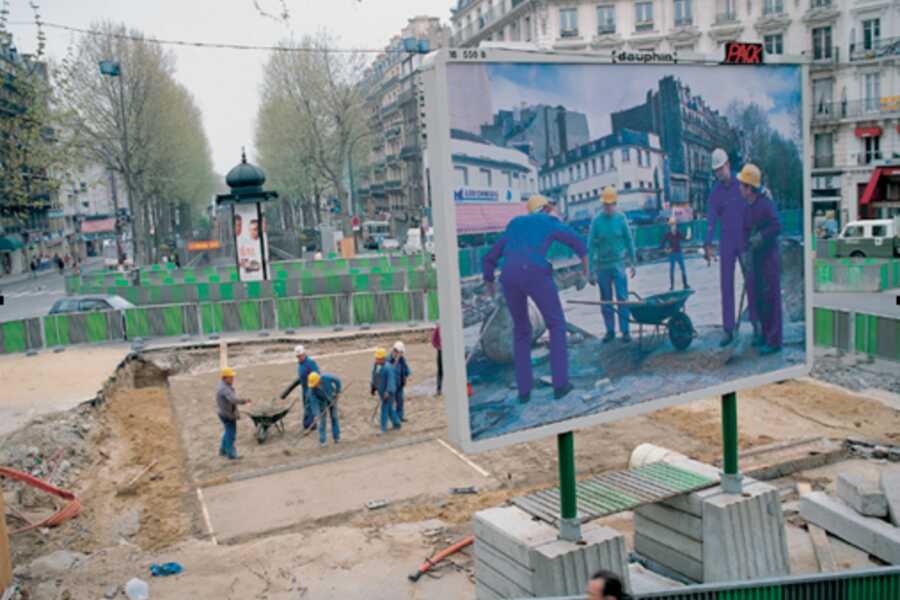 Huyghe already addressed issues of presence and witnessing in his early billboard, Chantier Barbès-Rochechouart (1994) (6). The title refers to a construction site on a square in the center of Paris, where Huyghe rented a billboard for one month (7). Huyghe took a photo of this construction site, and enlarged it to a poster format for the billboard. Hence, the artist created a photographic representation of the construction site right in front of the site and the building activities.

The French critic and curator Nicolas Bourriaud — well-known for his advocacy of one of the major artistic movements in the 1990s, relational art — misinterpreted the billboard at the time in his Deleuzian terminology as “une image directe,” which supposedly captured the event in real-time (8). Although it is accurate to say that Huyghe investigates the idea of simultaneity between an event and its image in the context of contemporary means of representation, the artist’s intention is not to construe a direct image in the manner of live-television. Huyghe rather questions the degree of illusion built into today’s modes of representation, as well as the role of the observer within it; if only, as we shall see, by re-staging the action on the site instead of merely recording it.

Given Bourriaud’s erroneous use of the Deleuzian concept of the direct image, I propose to relate Huyghe’s billboard to a relevant text of another (media) theorist, Samuel Weber. In his critical essay “Television: Set and Screen,” Weber reminds us that tele-vision — as its name indicates — is a medium that enables us to see over a distance: “The fascination and power of television as medium would derive, in great part, from its promise of providing a remote control, commanding not just at a distance but also over a distance” (Weber 1996, p. 116). One of the consequences of this ‘power’ of television, according to Weber, is that television occurs at three places at once: the place of production (where the program is recorded), the place of reception (where it is received), and the space of transmission in-between. Given that transmission is required to bridge the gap between the spaces of production and reception, Weber concludes that “television is perhaps first and foremost a method of transmission” (1996, p. 116). Huyghe’s billboard is powerful because he reveals the fundamental problem of live-television — the split between the spaces of production and reception, which television carefully conceals — in one single image by juxtaposing the construction site and its image on the billboard.

--------------------------
Note 6: I analyzed this work in depth in an unpublished paper on Huyghe, Sjoukje van der Meulen Remake vs. Readymade (2003), in which I argued that Huyghe mobilizes the remake as a medium in a critical response to Duchamp’s concept of the ready-made, which has lost its conceptual strength in the age of advanced media conditions.

Note 7: More precisely, Chantier means building site in French, and Barbès-Rochechouart refers to the area around a subway stop with that name to the North of the city.