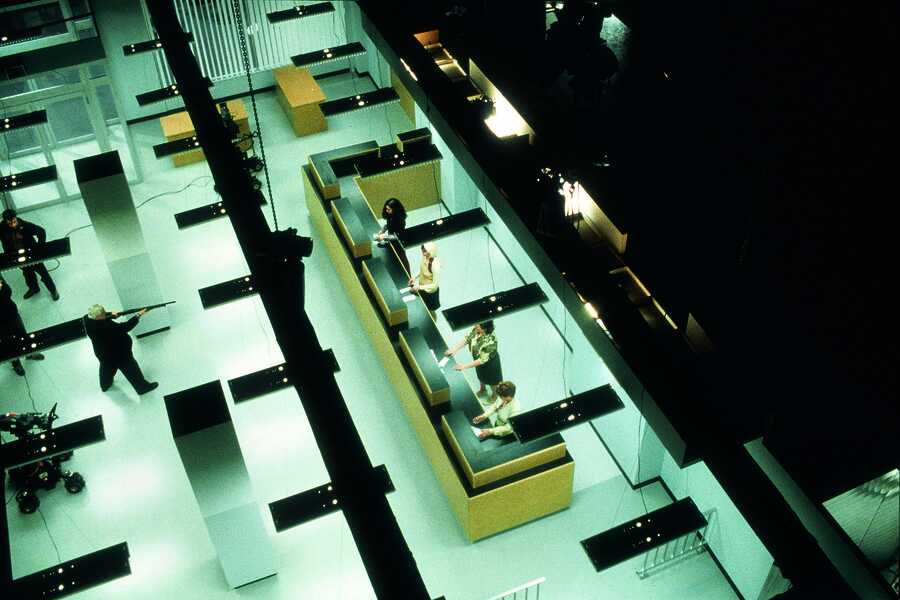 The reason why this work relates not only to physical and mediated presence (the actual event versus the mediated event), but also to witnessing and witnessed presence is because Huyghe decides not to recreate the film himself, but to track down the bank robber who committed the crime at the time, John Wojtowicz, and invite him to redo Lumet’s film (15).

Needless to say, I assume, that Wojtowicz is the crown witness of the event. The main concept behind Huyghe’s remade film is what the artist coins a mise-en-situation, his creative reworking of the notion of mise-en-scene (16). The tradition of mise-en-scene — which, translated literally, means ‘placing-on-stage’ — originates in the theatre, where it refers to the entire stage design, including the positioning and the movements of the actors on the set. It is also used in cinema, where it refers to the arrangement of everything that appears before the camera, such as sets, props, actors, costumes and lighting. The classic concept of mise-en-scene, however, is inadequate to explain Huyghe’s remake, because the artist does not work with actors and film sets but with real-life people and real-time situations, however reconstructed they might be. Huyghe, in other words, places a person back into a bygone situation, and asks him to re-enact the event. More than a film set, therefore, a mise-en-situation resembles an on-site reconstruction as is often ordered by a court and enacted by the main accused.

The association with a criminal court reconstruction is apt also because Wojtowicz’s helper ended up being killed by the police on the airport for dubious reasons. In Lumet’s film, the helper is shot in a seemingly unavoidable and well-prepared action of the FBI, but in the remake the former bank robber tries to convince us that his buddy was “cold-bloodedly” murdered thanks to “orders from Washington.” Wojtowicz complained about the false account of this fact in Lumet’s film long before Huyghe’s remake in a page-long article in the New York Times (exhibited with other news items in space one), in which he declared that “only 30% of the film is true.” (17). The crown witness in Huyghe’s remake thus evokes the legal sense of the concept of witness: a persona who offers not just first-hand information but is also responsible for telling the truth. The remake is a deadly serious affair for the bank robber, who aims at nothing less than bringing the ‘real’ criminals — the FBI— back on stage, who in Wojtowicz’s own account acted within that one fatal moment of media’s blind spot, when the view of the cameras on the airport was blocked. It is crucial to give a sense of the whole story, including its traumatic closure on JFK, because it clarifies what is at stake in Huyghe’s remake in terms of witnessing and witnessed presence. On the one hand Wojtowicz is a criminal, but on the other he is a media victim. In the whole media circus that develops around the crime, however, Wojtowicz gradually becomes aware of the workings of the media and discovers ways to get his story across despite media’s alleged gross misreadings — first by his confessions and criticisms of the Lumet’s film in a one-page article in the New York Times, then by redoing the same film on Huyghe’s request. For this goal, Huyghe provided the bank robber with the means of production, namely a film set with the recreated bank office and a number of actors. By means of this film equipment, Huyghe allows the crown witness, this susceptible pawn in media’s constructions, to take the media effectively into his own hands, thereby turning his media vulnerability into media potency. In the remake, then, we see and hear the bank robber directing his own film, which is shown next to Lumet’s original film in the installation. The moral is that if we gain a certain level of media literacy, everyone can seize media’s process of signification, including his own representation within it. This is probably why Huyghe has described The Third Memory as “the most straightforward, the most didactic of all my work” (McDonough 2004, p. 107).

Note 16: In a conversation I had with the artist in Paris (2001), Huyghe explained and elaborated on his original idea of mise-en-situation.

Note 17: This crucial newspaper article is reprinted in Huyghe (2000), p. 73. The sentence I am referring to can be found in the second column, and reads as follows: “I estimate the movie 30% true even though it states: this movie is based on a true incident that occurred in Brooklyn, NY.”

Angelo Vermeulen - "You can also take a positive view of violence and regard it as a kind of life energy, a…