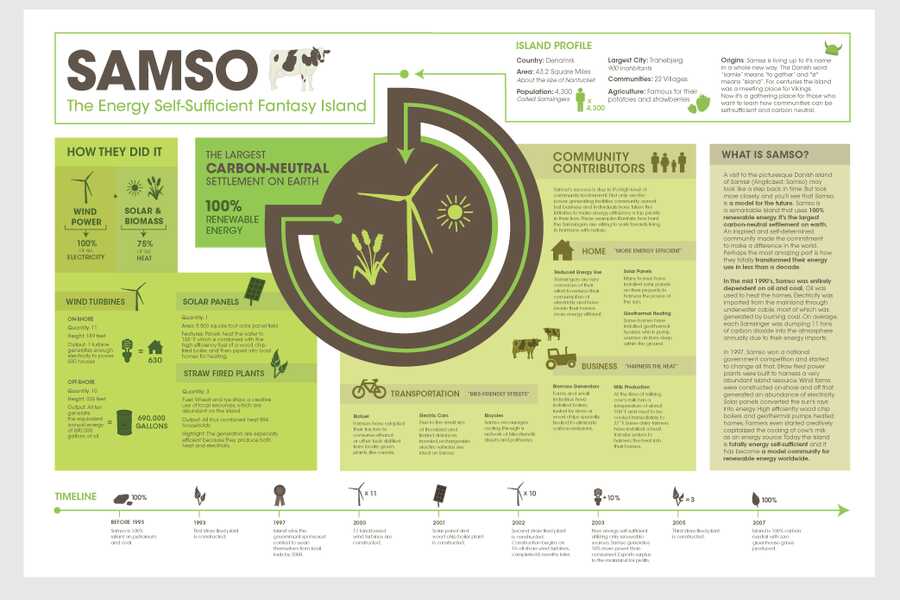 Only 2 weeks to go until we’ll be heading for Texel. I’m really curious if we can succeed in designing a self-sustaining socio-technical system by the end of the week and what the Tesselaars will think of our proposals. This week I was interested to see if something similar has already been done elsewhere. I remembered that I once read an article about a self-sustainable Danish island, which made me think of Texel. Could this be an example for us?

The Island I’m talking about is named Samsø and has about 4000 inhabitants. The island is about a quarter of the size of Texel and this also corresponds with the number of people living there: 4000 on Samsø compared to 13.600 on Texel. The tourist sector is also quite big with 500.000 nights spent each year. Although the ratio inhabitants versus tourists is smaller, this island is pretty similar to Texel. They began in 1997 with the transition and by the end of 2005 Samsø was self-sufficient in terms of energy. Although we are aiming for more than “just” self-sufficiency in terms of energy, it is interesting to see how they got the inhabitants enthusiastic for the transition. (More information on the sustainable interventions that were taken on Samsø can be found here, I will not elaborate them in this column.)

The first reason for this successful transition are the efforts of one man: Søren Hermansen. Without his vision on sustainability and his ideas on how to create jobs on the island the transition would not have happened. However, the fact that wind turbines are owned by 450 inhabitants and local farmers was crucial for public support during the realisation process. This community based ownership was possible because banks were generous with providing loans since the Danish government offers a fixed price for renewable energy, reducing the investment risk. Because of the huge financial benefits for the owners, 93% of the inhabitants chose to take part in the project and accepted the visual impact of the wind turbines. In my 4th column I also referred to a similar approach on a community owned renewable energy project in Delft and proposed this for our design on Texel.

Samsø is an even better example of how a self-sustainable design can generate public support to increase its feasibility. I should however make a remark on the fact that the island pretends to be self-sufficient in terms of energy. This is only because the island produces more electricity than it consumes, and besides initiatives of sustainable fuels such as rapeseed oil, most cars and tractors still run on fossil fuels. Self-sufficient, but still not sustainable. Electrical cars can be the solution to this downside; but this raises a recurring question about the willingness of people: how can inhabitants be convinced to drive electrical cars without providing another governmental subsidy?

So could Samsø be an example for Texel? We can definitely learn from this project, especially in the way it is realised, but we cannot copy it. For example: the way public support is generated. This is because of the financial benefits for the inhabitants and not because of their sustainable vison. Thereby, the island needs an overproduction of renewable energy to sell to the mainland and to make profits for the inhabitants of Samsø. Applying this to Texel would mean dozens of wind turbines and enormous investments, but above all this has nothing to do with a socio-technical system anymore.

I think a good socio-technical design solution should not be realized because it contributes to the financial wellbeing of inhabitants; a good design should improve quality of life on the island in a sustainable way. In my opinion the design for Samsø is too much about the financial benefits, although the design could not have been realised otherwise.