During the exhibition of the Biomodd installation in Sint-Niklaas, several team members took active care of the art work. It’s relevant to note that although people took pride in their individual creations, they considered the whole setup as one single installation with a strong sense of ownership of the entire art work.

Team members didn't limit maintenance work to their own contributions, but made sure all computer systems were checked, and all plants were taken care of. This particular kind of 'witnessing' connected and integrated the whole installation on a cognitive and emotional level. This was strengthened by the fact that all individual creations had been physically networked in one multiplayer environment. Also, many plants were distributed throughout the installation and were not readily perceived as belonging to any particular computer system.

During the exhibition, team members were eager to share the Biomodd installation with festival visitors. They improvised guided tours and sketched the broader context of the project. It was interesting to see how part of my artistic discourse got actually copied and pasted into their own storytelling.

During post-workshop interviews, I asked participants whether and how they communicated the project to their own personal network. Some used an assignment in art class to explain the project to their schoolmates. Others discussed their work with the IT and biology teachers at their school. They felt proud of being part of Biomodd, and generally received good response. Hardcore gamers however, did sometimes dismiss Biomodd because of its lack of high performance hardware and the absence of recent mainstream games. Most of the team members also connected with each other online, and then communicated the workshop through their social networks.

A public 'Biomodd Game Tournament' was organized during the course of the exhibit. The idea was to have a full-day contest for Biomodd team members and public. The rewards were in-kind donations from a local game store. The tournament also functioned as a means for outreach and publicity of the Biomodd project (and the Coup de Ville arts festival). Some of the team members showed great enthousiasm for this event: Jorrit talked extensively about it to his class mates, Thomas was strongly involved with all the technical preparations, and Mathias took care of sponsoring and further outreach. The day of the tournament however, most visitors only joined in for a few gaming sessions. Since they were obviously also interested in the rest of the festival they rarely stayed longer than one hour. Biomodd team members were the only ones joining the tournament for its entire duration – and consequently won all the prizes. 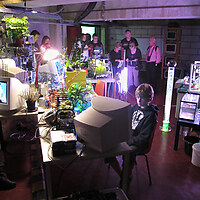 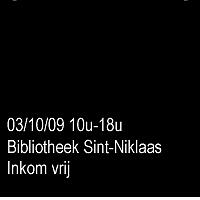 Frans-Willem Korsten - Walker’s solution, by digging in history and archives and turning the objects she has found into an…