In the press the issues of the new computer era, which were raised by the GHP, were sketched convincingly. Hackers want to show that systems are not safe and help companies and governments to make these systems safer. But at the same time hackers promote the idea that information should be free. Some arrests were made in 1988 and the Robin Hood idea of the hacker, versus the Hacker as a Thief was explored in a variety of articles.

Hackers were a new phenomenon for the media at the time, while there was enough awareness that computers had become more and more important in our day-to-day lives. In the Netherlands the Franken Commission was preparing a law, which would define what computer crime would be, but this was still in process. As a producer I have to add that organizing this sort of event in the middle of the summer triggers more press attention than it would in the fall. In the summer the press is looking for news issues to cover for readers who are on holiday and like to read slightly longer articles.

We hit the national TV news and had extensive articles published in national newspapers and magazines concerning the GHP, its guests and the issues it raised. Some impressive international coverage also appeared because it was the first time that hackers from the USA and Europe had come together, and people from all continents had participated via the network: from Brazil, New Zealand, Moscow, Nairobi and South Africa, Hong Kong and more. A special edition of Liberation (Fr) came out, which was called "Informatique, Le bal de Voleurs" note 98; the front page of the Wall Street Journal (USA) carried an article with the title "Nerds of the World Unite Ñ and Defend Their Right to Hack" and the Guardian (UK) emphasized the connection with the Russians with the title "Galactic Hackers log on to Glasnost". Below is an overview of the press coverage that demonstrates a clear build up, an extensive reporting (also in many regional newspapers in the Netherlands) and a scaling down of press attention (Press Folder, 1989). 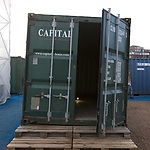