The role of rhythm in facilitating sense-making in human communication lies in prior research findings that information transfer is managed with prosodic and rhythmically synchronized movements of body and voice. A particular focus is on pragmatic information.

Pragmatic information in this context denotes how we let each other know how we are understanding each other. In speech, for example, we do this through the feedback we give each other, and one form of this are backchannels (uh huh, ok, so, right, um). The linguistic equivalent in the body is through movements such as head nods, and other body movements. In this research, synchrony and rhythm of body and voice are seen to facilitate the mutuality of immediate social interaction and are considered to be a fundamental dimension of social presence. The immediacy and mutuality of embodied face-to-face interaction is regarded as the base for understanding how we sense and time our coordinations with each other. Rhythm in gesture coordination and prosody allows people to attune to each other, interpret significances and make manifest their intentions as part of the context rather than the substance of the information interchange. From music, the concept of ‘floating intentionality’ (Cross 2008) brings together the idea of the mutual manifestation of intention in language (Sperber and Wilson 1986) with intentionality from a musical context and is of interest to this research. The findings from neuroscience on rhythm and entrainment (music and neuroscience), and of self with other self (mirror neurons), provide support for interpersonal synchrony that is studied using experimental and observation techniques within various disciplines, most significantly music psychology, psycholinguistics and social psychology, kinesics, gesture, and interaction analysis.

Our everyday communications with people with whom we work, love, and share friendship is increasingly distributed in time and place, even when sharing a geographical locale. This necessitates that we constantly move within mixed realities shifting between face-to-face and online interactions (e.g. email, facebook, skype), whether sharing an office, a classroom, and a home. Communicating via screens, often with delays and disruptions in audio and video channels and email, means that we have to adapt to these conditions that differ from the experience of sharing our physical body space. The increasing use of social networking sites and video chat software shows that we do find ways to adapt, as it affords us some capacity to move in time with one another or speak in time with each other at an affordable level. And it is this dimension of moving in time, of mutual adaptation, that is the concern of this paper, specifically the effect this has on how we engage and make sense of each other, and thereby transfer information.

The inspiration for this paper comes from two sources. The first is my research in rhythm in human… 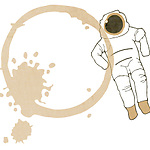 Caroline Nevejan - Computer infrastructure is not much more then a couple of bites in one way or another. So there’s…