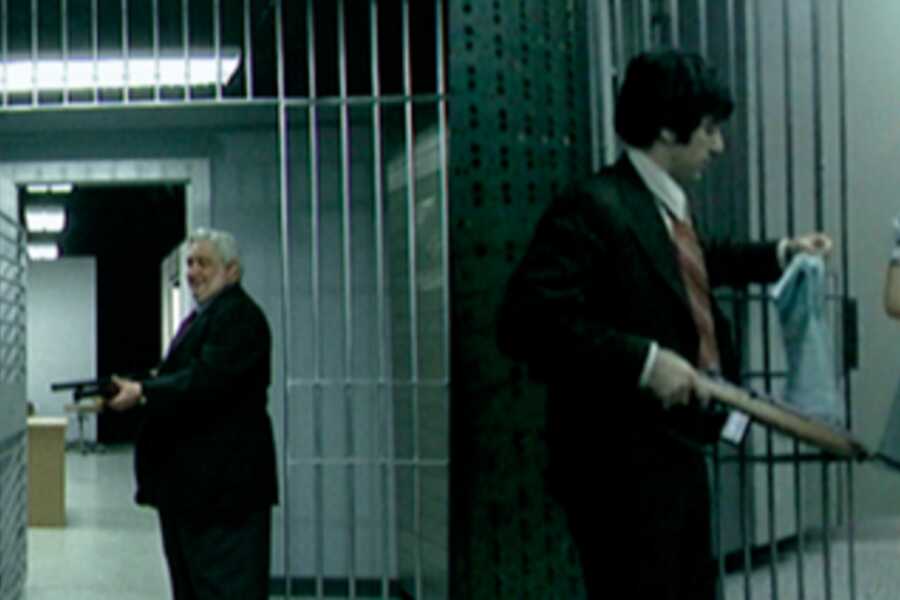 A wide range of artworks have been created within the new media that can be explained through the interrelated concepts of natural, mediated, and witnessed presence. A classic example is Stelarc’s tele-performance Ping Body (1996), in which the artist is connected to a muscle stimulator that can be operated by users/spectators at a distance via Internet. Another classic example from the early days of the Internet is Ken Goldberg’s Tele-garden (1995). The growth of this small garden could not only be observed but also be cultivated by users of the Internet through a webcam linked to a robotic arm programmed to water on demand.

Other projects worth mentioning are Julia Scher’s projects, such as Security by Julia (1989-1990) and Security land (1995), because her work interrogates camera-based surveillance systems in both real and virtual environments. Then there are also a couple of real-time performances not dependent on technology such as Marina Abramović’s two and a half months performance The Artist is Present in the MoMA (2009), in which she sat silent at a table in the museum’s atrium every day, facing a chair which could be occupied by museum visitors who wished to engage in a (spiritual) encounter with the artist. The work perfectly fitted in Abramović’s oeuvre, which has always tested physical limits and psychological endurance, but at the same time the performance functioned as a tacit protest against the mediated world, where physical and spiritual presence are often overshadowed by images and simulated realities.

But while there are many artworks that deal with the complexities of natural, mediated and witnessed presence, just a very few critically dissect the impact of the media and its workings on culture and society at large, from aesthetics to ethics, human perception to social relations, cultural representation to historical memory. This, I argue, sets Huyghe’s work apart. Besides the billboard in Paris, in which he reflects on the status of the image in media culture and society, another good example is The Third Memory (2000), a multimedia installation based on a remake of Sidney Lumet’s well-known film Dog Day Afternoon (1975) about a bank robbery that actually happened in New York (1972).

Besides the fact that Lumet’s film narrates a real event, which is stated at the opening of the film, Dog Day Afternoon is a remarkable movie for other reasons as well. First, it features the first televised bank robbery in media history; which is to say that the heist was captured on live-television when it occurred — in unity of time, place, and action, as Nevejan would say. Second, the motivation behind the robbery was rather extraordinary: an act of love by a homosexual who wanted to finance the sex change operation of his adored lover. As a result, the bank robbery was hotly discussed in both the printed media and on television sit coms, and put the whole scope of the media apparatus in full motion — i.e. television, film, and the printed media, including a novelette, The Boys in the Bank, on which Lumet’s film is apparently based. The installation is all about the workings of the media in culture of society, and our participation in this “reality of the mass media” (Luhman, 2000).

In the best presentations of the work, the installation is shown over two adjacent spaces: the first space exhibits the news items that occurred about the event and the TV sit coms (including The New York Times, Daily News, etc) against the wall that both spaces share, while the second space shows a double-screen video projection on that wall’s backside, where fragments of the film and its remade version are set side by side. With such a crystal clear design of the installation — as in the presentation in the Centre Pompidou (2000) — the spectator gains vital information about the bank robbery in space one, while he is prepared to compare fragments of Lumet’s film with Huyghe’s remade version upon entering space two (14).

-----------------------------------------
Note 14: In Gallery Marian Goodman in New York, the newspapers articles were hung unnoticeably in the corridor leading up to the space where the double-screen video projection was shown. The pedagogical clarity of the presentation in The Centre Pompidou was lost. Even worse, in the Guggenheim Museum, the work was integrated into a video program, and nothing left of the indispensible part with the printed news media.

Sjoukje van der Meulen - Huyghe’s work was included in both the show and the catalogue of Future Cinema, but evidently he is…