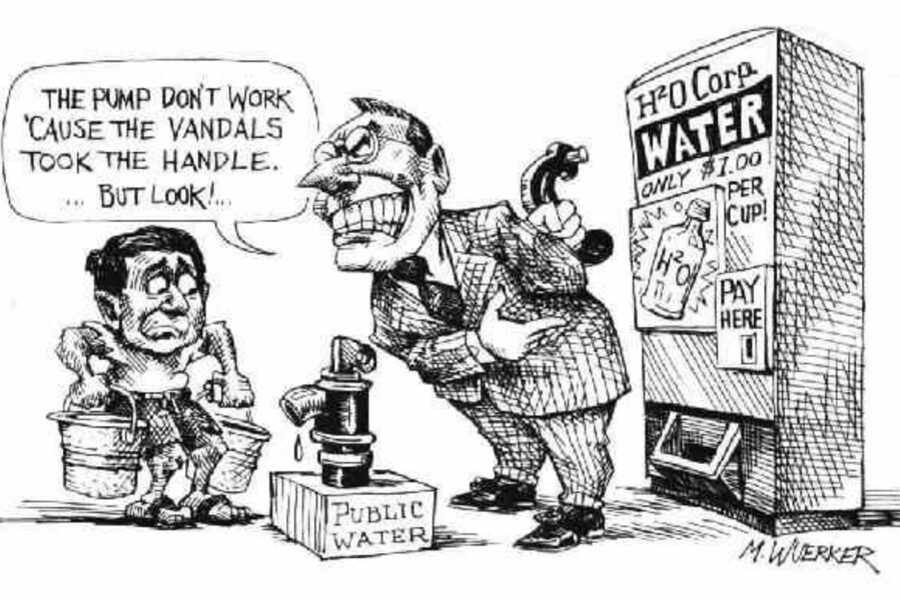 Wars have been fought over it. It is one of the most precious elements found in nature. It is so essential, that without it, you die within a few days. Large corporations such as Nestlé and successful entrepreneurs such as the Bushes or T. Boone Pickens are buying large quantities of it with only one goal in mind: tremendous profits.

I am not talking about oil, I wish I was. Water is what I am talking about. Water that you and I are so used to. Water that we use to shower ourselves. Water that we drink whenever we are thirsty. Water to wash our clothes, to cook or to do the dishes. This water, by some already called ‘the blue gold’ or the ‘gold of the 21st century’, will most certainly lead to conflicts in the future.

If you just follow the money, you will notice that the world’s billionaires and investing powerhouses are buying large plots of lands on top of aquifers, natural underground sources of potentially potable water. T. Boone Pickens recently bought up 200.000 acre on top of the Ogallala Aquifer in the United States, enabling him to drain 65 billion gallons of water per year and sell it back to the US population. The Bush family bought in 2006 300.000 acres of land in Paraguay on top of the Acuifero Guaraní, the world’s largest aquifer running beneath Brazil, Argentina, Uruguay and Paraguay and more than 25 times the size of the Netherlands. But it does not stop here. Big banks such as Goldman Sachs, JP Morgan, Citi Group, Barclays, Credit Suisse or Deutsche Bank are acquiring water sources as well. Clearly water is an important power tool of today, but even more of tomorrow.

A sustainable future for the world and its population revolves around sufficient resources for everyone. Water is one of the most vital resources for human survival and in my eyes it is therefore very short-sighted to put the control of the population’s potable water supply into the hands of a few individuals that most probably have different interests than you and I. Is there something we can do about it? Yes we can!

-          Demonstrate against plans for the privatization of water. Last year, already 1,5 million people in Europe protested against the plans for the privatization of the European potable water supply by Euro Commissioner Michel Barnier. We have to show that the control of the water supply should be in the hands of the people and not in the hands of few individuals who strive profit and won’t have much social incentive to care about quality;

-          Taking control back into our hands, by using crowd funding to buy up Aquifers and establish bottom-up organisations run by representatives of the population in charge of the draining and the distributing of the water;

-          Becoming less dependent on the conventional water grid, by deploying new technologies. Communities, but also countries, can become less dependent on the conventional grid by focussing on new technologies that can aid in generating a potable water supply for the population. I am talking about techniques such as the start-up ‘Dutch Rainmakers’, that deploys a wind turbine to generate green energy and extracts heat out of air with water as a by-product. Another promising technique is the desalination of seawater with the use of solar energy. I once heard that almost 50% of the world’s population lives within 150 kilometers from the sea. If we could use green energy to desalinate sea water, this would be a huge revolution for all these coastal areas and even more for the coastal areas that have to cope with extreme droughts such as parts of Northern Africa and the Middle East.

I am still hopeful that with new realizations among the population and new technologies such as desalination, people can get the power back of winning water from the large corporations. And for certain things, such as flushing the toilet, we can use more and more grey water that is retained by green roofs. Still, we need to make global agreements NOW, to avoid territorial conflicts between countries (rivers and lakes are not bound to borders) and to avoid that lower income groups in developing countries will be hit hard and will have to use excessive amounts of their income for bottled water of multinational corporations. Because let me warn you: if we don't act, this will be our future.