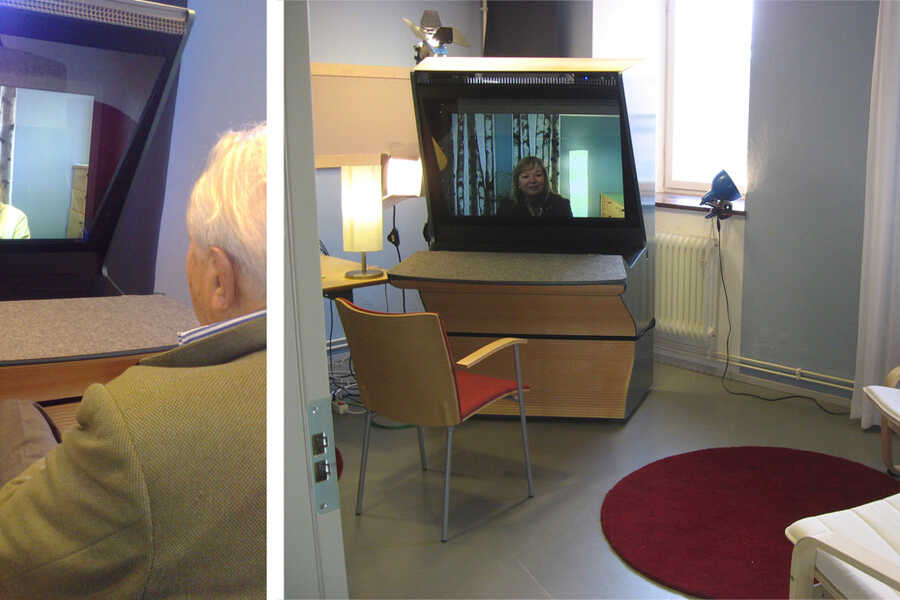 In the spring of 2008, a mediated therapist treated twenty patients remotely, in a workplace designed to support mediated presence.[16] What is particular about this example is that it concerns a specific form of dialogic interaction, where trust is a core element.

On the day of the first appointment, a patient was received in person, inside a mediated consulting room, seen below (Fig. 10). The patient subsequently met the doctor six times in the same space. On entering the room on these later occasions, the patient faced the doctor, visibly seated at her desk, but nevertheless in a different pace. The desk was part of a furniture series designed to enable mutual gaze and mediated presence (Gullström 2010: 133ff). The interiors of the two spaces were similarly furnished.

The length of each therapy session was approximately 1 h, during which the therapist assessed the patient’s health using conventional tools from Cognitive Behavioural Therapy (CBT), based on many years’ experience in treating similar patients.[17] The therapist took special notice of how she greeted patients remotely but followed the same procedures as if she had treated patients in a real space. She was able to fully perform her professional assessment of patients during the mediated dialogic interaction.

I use this example because it shows that a mediated architectural extension serves this particular form of dialogic interaction sufficiently well for the doctor to perform her professional assessment. From the study, the mediated therapist concluded that she could carry out her work as well as she would have in a real space facing the patients. In effect, the doctor experienced the mediated therapy was less mentally exhausting than conventional practice, a result that is also supported by previous research (de las Cuevas et al. 2006). The design explicitly provided a situation where the patient ‘was seen’ and where the design provided a framing in which the doctor’s gaze became more prominent than in a shared real space. Further, the study showed that the patients’ health improved as well and that they expressed a positive experience of remote presence and mediated therapy.[18]

------------------------------
Note 16: User study I conducted in 2008 within the ‘Mediated Spaces’ research group of the VINNOVA Centre of Excellence for Sustainable Communications, Royal Institute of Technology. Responsible for presence design: myself and Leif Handberg based on earlier prototyping by myself and Mats Erixon.
Note 17: The doctor who participated in the study, Agneta Ekman, MD, is a private consultant and specialist in psychiatry and occupational health. Patients were diagnosed using MINI (Mini International Neuropsychiatric Interview, rev. 060405), their mood was assessed using MADRS (the Montgomery-Åsberg Depression Rating Questionnaire), HAD (a diagnostic instrument Hospital Anxiety and Depression Scale) as well as EQ (diagnostic instrument by EuroQoL Group 1990).
Note 18: The most common diagnosis reported were major depression, dysthymic disorder and generalized anxiety disorder (GAD). Five had bipolar depression. A majority of patients was treated with antidepressants and/or mood stabilizers as part of CBT. After seven therapeutic sessions, patients’ satisfaction and impression of the mediated therapy treatment were reported in a questionnaire, from which positive responses were concluded; I also conducted five interviews with Dr Ekman and five with patients; Ekman (2009) reported 85% patient improvement measured in MADRS (0-11) and HAD (0-6), in accordance with previous studies regarding the effectiveness of telepsychiatry.

The example of a mediated therapist