Space is defined fundamentally by how one interacts with a space, Jansma argues. As a child he remembers drilling a hole in an internal wall, which came out in the bathroom of his mothers and fathers place. So for the first time he became aware of the concept of space.

He found that there was a spatial relationship between those two confined spaces and with the appropriate tool Jansma found at the age of 7, that he could connect those two spaces. By participating in a space, touching it, engaging with it, the perception and vision of the built world is, changes. For Jansma the most stimulating buildings are those where he can see or feel the joy of the designer while creating it. The joy and the curiosity one can sense gives a lot of energy and human beings want to connect with such energy. For Jansma architecture is not about generating meaning, he actually would feel embarrassed in such a one-directional concept of architecture. For Jansma architecture is about how people get energized or stimulated by a piece of work, so people get motivated and challenged them selves. Architecture is very much about people influencing their own environment and technology gives wonderful and very powerful tools to do that. As architect one tries to stimulate and convey the joy of searching for solutions, for meaning and imagination. 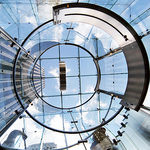 Caroline Nevejan - At the GHP I was actually surprised so many times by the trust people placed in each other, which…