In the first case study I elaborated upon 'personal time zones' caused by habits and geographical relationships. One of the issues ACT UP has raised is that the verdict on being a carrier of the virus does have an impact on how people perceive the natural presence of oneself and of others. Social realities, including the medical, have an impact on how the perspective of a personal time zone is perceived.note 191 In principle we all live like we always will, because we do not know when and how we will die. That we will die though is one of the surest things on this planet. In that sense we have all had a verdict passed on us. But being diagnosed with HIV or AIDS limits the uncertainty about how and when a person will die, and in that sense it influences personal time zones and the way they are experienced.

The sense of presence operates in a realm where 'not surviving' is as real as 'surviving'. That is why we need the sense of presence, but we are hardly aware of it. Receiving the verdict from medical technology that one's life will end challenges the sense of presence a person possesses. In natural presence the sense of survival is challenged to the maximum, since without natural presence, a person is no more. He/she may be absent to others, may be missed and mourned, but the person who received the verdict has to deal with a changed perception of one's own presence because it has been declared limited. This influences how people 'survive' which influences how the sense of presence evolves. The change in natural presence after being diagnosed with HIV and the change after being ill is part of the processes that people go through when facing death. However interesting, this is not a subject of the research carried out here. I do want to establish the fact that it is amazing that through ACT UP, and also through all the people who contributed to the 0+Ball, a sharing of this change of perception of one's own presence and the perception of the change in the presence of others, became an issue that inspired people to have debates and conversations and create works of art. The social perception of one's own presence and the social perception of other people's presence deeply influences how we operate (and how we operate is a result of the understanding of these social perceptions). This may be for the good, but it can also generate and legitimise racism, sexism and homophobia in this case. The witnessing of each other's natural presence influences how people interact socially, and functions as a catalyst for constructing and deconstructing the dynamics of homophobia, racism and sexism.

Caroline Nevejan - The climate in which these events took place was highly political as must be clear by now. A… 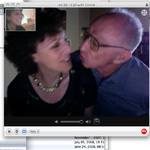